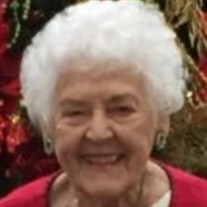 Born February 15, 1927, Joan Lola (McLean) Majoros Kozlowski of Toledo, Ohio passed away on January 11, 2021 at age 93 from Covid-19 complications. Jo graduated from Woodward High School in 1944 and remained connected with her sorority sisters for over three decades. She received her bachelor’s degree in Education from the University of Toledo followed by her master’s degree in Education graduating Magna Cum Laude. Over the years Jo worked in the photography department at Lasalle’s, as an instructor at Arthur Murray Dance Studio and as a waitress at the Plantation Inn. After a long career as an educator in the Washington Local School District at Greenwood Elementary, Jo continued to work as a substitute teacher and tutor. She followed that up with over 20 years of service as a candy striper at Flower Hospital. Throughout her life Jo was active as a competitive athlete. She travelled the country competing in the sports of volleyball, golf, and bowling. She also coached volleyball at Whitmer High School and taught line dancing at multiple locations. Jo spent her later years wintering in St Petersburg, FL where she occupied her days golfing and line dancing. She was shooting under 100 golf until she was 90 years old. Jo enjoyed watching sports on television and volunteered at PGA and LPGA tournaments when they came to Toledo. Notable for her lively personality and competitive spirit, she welcomed all challengers for card games, table games and lawn games. Visitors to her home were always given a tour of her music box and crystals collections. Her family will miss the Hungarian pastries that she enjoyed baking for them. She is survived by her children, Terry (Cherie) Majoros, Scott (Becky) Majoros, Jill (James) Majoros Lieber and Kevin Majoros; grandchildren, Holli Majoros, Jeff (Corrine) Majoros, Josh (Ashley) Majoros, Alexis (Devin) Graves, Ashley (Jason) Sczcublewski, Aarron (Jenna) Lieber, Abrielle Lieber, Alyvia Lieber and Alec Lieber; great-grandchildren, Avery Oess, Aiden Oess, Mia Graves, Maisy Graves, Greyson Lieber, Gibson Lieber and Amiyah Contact and many caring nieces, nephews, cousins and friends. She was preceded in death by her son Keith Majoros, husbands Joseph Majoros and Todd Kozlowski, parents Vergil and Grace (Reeves) McLean and sisters Jacqueline (McLean) Bialorucki and Shirley (McLean) Nichpor. A special thank you to her caregiver, Desiree Miller and the nurses at Ebeid Hospice that cared for her in her final days. There will be a Celebration of Life at a later date due to Covid-19. The family asks for any donations to go to the Toledo Junior Golf Association or Eleanor Kahle Senior Center.

The family of Joan Lola (McLean) Majoros Kozlowski created this Life Tributes page to make it easy to share your memories.