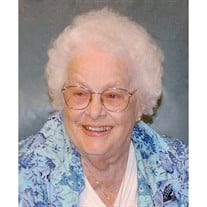 Joanne R. Curtis, 93, of St. Petersburg, Florida passed peacefully away early Tuesday morning, September 30, 2015. Joanne was born in Toledo on March 15, 1922 to Paul and Marquerite Roberts and resided in Toledo for most of her life. She was married to the love of her life, Richard Curtis for more than 50 years and together they raised 3 children. Joanne was formerly a secretary at the Maumee Historical Society (Wolcott House) and was active for many years at The First Baptist Church of Greater Toledo. Joanne lived a good long life. Adored by her husband, children, grandchildren and great grandchildren. She was a safe haven and a warm and welcoming sanctuary for many. Her legacy is that the little things sometimes matter even more than the big things Everything about her, whether it was the smell of her makeup or a glass teddy bear shaker, these are all things that, when woven together, creates somebody's security blanket. Every hug, every popcorn and movie night, every inside joke - they all matter Survivors include her sister, Eleanor Burt, daughter Judith Shear (Michael), Daughters-in-law Jacqui Lopez (Angel), Jill Weidner (Gene), Kay Kidd, Teresa North and Anna King. Grandchildren William Curtis Jr. (Chanping), Robert W. Curtis Jr. (Rachel), Michelle Hicks (Bo), Jenne Street (Aram Delgado), and Sherry Andrews (Tom), many great grandchildren ranging in age from 1 to 22, nieces Carol Pomeranz,, Sally Mennicke , Dian McKelvey, Nancy Kloha, Maryann Witters, Nephews Jim Curtis and Rick Curtis. She is preceded in death by her parents, brothers William and Paul Roberts, sister Virginia Roberts, husband Richard W. Curtis, sons William Curtis Sr. and Robert Curtis Sr. and grandson Brian Street. There will be a visitation on Sunday evening from 5:00 to 8:00 pm October 4th, 2015 at Ansberg West Funeral home at 3000 W. Sylvania Avenue, Toledo, Ohio where funeral services will be held on Monday at 11:00 am. Interment in Ottawa Hills Memorial Park. Condolences for Joanne's family may be expressed online at www.ansberg-west.com

Joanne R. Curtis, 93, of St. Petersburg, Florida passed peacefully away early Tuesday morning, September 30, 2015. Joanne was born in Toledo on March 15, 1922 to Paul and Marquerite Roberts and resided in Toledo for most of her life. She was... View Obituary & Service Information

The family of Joanne M Curtis created this Life Tributes page to make it easy to share your memories.