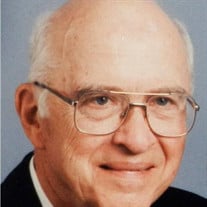 If your lights dimmed slightly on the evening of July 19, 2018, it may have been because John B. Cloer Jr, 94, of Keystone Heights, FL. went off the grid that evening. John was born in January 1924 in Lincoln Nebraska to John and Annie (Saunders) Cloer. He married Esther Modrall on March 1, 1946 in Toledo, who preceded him in death. They had 4 children; a stillborn son Timothy A., John “Dug” Douglas ( Linda), daughter Luann Ruth and son Brad (Diane). Two grand- daughters provided several great grandchildren. John devoted his life to managing the delivery of energy, literally and figuratively. As a Vet, he ran a power plant for an Army base in the Philippines. After we won that war he returned to UT to complete his Electrical Engineering degree. From there he launched a nearly 4-decade career with Toledo Edison, mostly as Southern District Manager based in Defiance, OH. Whenever there was a significant power outage he was on the scene, 24/7, despite being a senior executive. He was a respected pillar in the community, including involvement in Hospital Board, Youth for Christ, YMCA, Rotary, Chamber of Commerce, First Baptist Church and more. Perhaps most impressive was his parenting as a strong Christian father. He allowed freedom of thought and will, while suggesting an appropriate biblical path for his children. Well known for his quick wit, he was always entertaining, with a (often corny) joke. Frankly, he was a spectacular leader, a source of positive energy to the community, and especially to his friends and family. God bless John B Cloer Jr. People like him don’t come along every day. Visitation is Tuesday August 7 at 11:00 am in the Chapel of Peace, Toledo Memorial Park Cemetery, followed at noon with a special funeral service featuring John’s brother-in-law Ben F. Wood. Preferred memorials are to Emmanuel Baptist Church in Toledo or the Fort Defiance Humane Society. Arrangements have been entrusted to the Ansberg-West Funeral Directors, 419.472.7633. To send his family online condolences, please visit www.ansberg-west.com.

If your lights dimmed slightly on the evening of July 19, 2018, it may have been because John B. Cloer Jr, 94, of Keystone Heights, FL. went off the grid that evening. John was born in January 1924 in Lincoln Nebraska to John and Annie (Saunders)... View Obituary & Service Information

The family of John B. Cloer created this Life Tributes page to make it easy to share your memories.