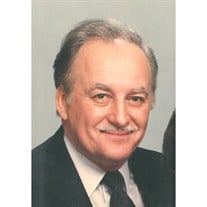 John A. “Coop” Cupertino, 88, of Toledo, passed away Tuesday, July 5, 2016, at Ebeid Hospice. He was born March 3, 1928, in Green Bay, WI and was the son of Anthony and Margarita Cupertino. John served honorably in the Army during WW II. Following his service in the Army he worked in a management position for Jeep Corporation for over 30 years, before retiring. John also played in various bands, including Glen Miller. He was married for 40 years to Delores (Treglia-Coffman) Cupertino and she preceded him in death in 2015. John was a member of the VFW Post 2898. John enjoyed watching football and was an avid Green Bay Packer fan. He loved going to his cottage on Barton Lake and riding his pontoon boat. John also enjoyed watching “The Price is Right” and was always telling jokes. John is survived by his step-daughter, Cheryl Coffman; son-in-law, Ruben (Diana) Gonzales; step-grandchildren, Jennifer Coleman, Jacqulynne Nowak, Sean Nowak; 4 step-great-grandchildren; sister, Diane Cupertino and nephew, Mike. In addition to his wife he was also preceded in death by his, parents, step-daughter, Diana Armstrong-Gonzales and step-son, Steven Coffman. Friends are invited to visit on Monday, July 11th, from 3-8 p.m., at the Ansberg-West Funeral Home, 3000 Sylvania Avenue, (between Secor and Douglas Roads), where the VFW Post 2898 will conduct services at 7 p.m. Prayers will begin on Tuesday, July 12th, at 9:30 a.m., from the funeral home, followed by the funeral mass at 10 a.m., at St. Clement Catholic Church, 3030 Tremainsville Road, with Reverend Francis Speier officiating. Interment will follow in Ottawa Hills Memorial Park, where the Lucas County Veterans Burial Corp will conduct services. The family would like to extend a special thanks to Patty Wright for helping care for John. Online condolences may be sent to the family at www.ansberg-west.com

The family of John A. Cupertino created this Life Tributes page to make it easy to share your memories.