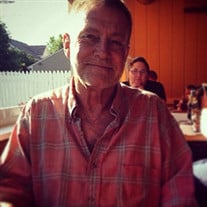 EGGERSTORFER John F. John F. Eggerstorfer, 63, of Toledo, Ohio passed away Tuesday, May 12, 2015, at Toledo Hospital, alongside his beautiful family. John was born December 29, 1951, in Toledo, Ohio, to John & Mary Joyce (Hancock) Eggerstorfer. John graduated from Central Catholic High School and was known for being a heck of a football player and a handsome gentleman. He worked hard for General Motors for 38 years and has been happily retired for 8 years. Multiple time chili cook-off winner and lover of all things spicy, he had a culinary flair that lives on in his children. John could be spotted walking his dogs multiple times a day or on the golf course as soon or often, even before weather permitted. He will be remembered for being a wonderful and endlessly selfless father, friend, son & brother. His father, John Eggerstorfer; brother-in-law, Jeff Hulett, and niece, Mary Hulett; preceded John in death. Survived by his mother, Joyce Eggerstorfer, son, Ryan Eggerstorfer, daughters, Nikki & Sarah Eggerstorfer, sisters, Mary (Dave) Glowacki, Lynn Hulett, Carole (Jim) Schira, Julie (Justin)Riggle; along with many nieces and nephews, and dear friend, Sandy Eggerstorfer. John has a great love for all animals and is survived by his adoring dogs, Tokyo & Max, and his cats, Otto & Aphro. Memorial donations may be made to the Toledo Area Humane Society, 1920 Indian Wood Circle, Maumee, OH, 43537, in John’s name to continue to spread his love and care to animals in need. Friends are invited to visit from 2-8 p.m. Friday, in the Ansberg-West Funeral Home, 3000 Sylvania Avenue, (between Secor and Douglas Roads), where funeral services will be held Saturday at 11 a.m., with Msgr. Michael R. Billian officiating. A special thanks to all those in the Kenwood group for their friendship, love, and support given to John and his family. Online condolences may be made to the family at www.ansberg-west.com

The family of John F. Eggerstorfer created this Life Tributes page to make it easy to share your memories.