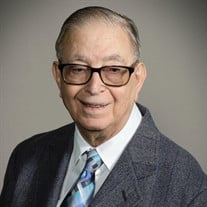 John George Farran, 92, of Sylvania, Ohio, passed peacefully at home on September 23, 2018. He was born March 4, 1926 in Toledo, Ohio, to George Elias and Evelyn Farran. A 1944 Scott High School graduate, John left college in 1946 to serve in the U.S. Army and was stationed in Japan at the end of World War II. He returned to the University of Toledo in 1948 where he was a member of Sigma Phi Epsilon, and completed his degree in chemical engineering in 1951. John was employed at J.H. Cristill Co. (Edgerton, Ohio) and Atech Paint Company before joining General Motors as a chemical engineer in 1956. He retired with 33 years of service in 1989 and was an active member of the GM Salaried Retirees Group, serving as Vice President (1995-96) and President (1997-98). John was married for 52 years to Deanna Tuley. They met at Hampton Park Christian Church, which he considered his “second family,” and he served as an Elder, Chairman of the Deacons, and Sunday School teacher. He was President of the church bowling league when they met, and bowling was his favorite hobby for many years. He is survived by his wife, Deanna, daughters Karen Farran and Wendy Krouse (Thomas); sisters Yvonne Mock and Violet Barrow; and many beloved nieces, nephews, and cousins. He was preceded in death by his parents, George Elias and Evelyn Farran, sister Mary Saliba, and brothers E. George Farran and Robert Farran. Visitation will be Thursday, September 27, from 2:00 PM to 4:00 PM and 5:00 PM to 8:00 PM at Ansberg- West Funeral Home, 3000 Sylvania Avenue. The funeral service will be held at Hampton Park Christian Church, 4727 Sylvania Avenue, with Rev. Mary Jo Bray officiating, on Friday, September 28 at 11:00 am, with final visitation at the church at 10. In lieu of flowers, contributions may be made to Hampton Park Christian Church or the charity of your choice

The family of John George Farran created this Life Tributes page to make it easy to share your memories.