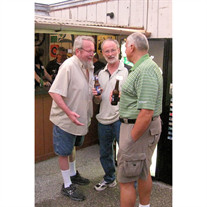 KOPKA John C. John C. Kopka, 57, of Toledo, passed away unexpectedly on Friday, January 9, 2015, at St. Vincent Mercy Medical Center. He was born December 5, 1957, in Toledo and was the son of Fred and Marian (Murray) Kopka. John was a 1975 graduate of Start High School. He was an avid fan of the Toledo Rockets, Ohio State Buckeyes, NASCAR driver, Mark Martin, New York Rangers and the Green Bay Packers. John was a meat cutter at Toledo Quality Meats, which he owned. He was also an excellent cook. John is survived by his wife of 23 years, Sue Kopka; siblings, Sharon (David) Lewis, Deborah (Dennis Zeisloft) Kopka and Richard Kopka. He is also survived by his nephew, David (Beth) Lewis; nieces, Katherine (Dean) Devenie, McKenna Essman and Christine Seeholtzer; great-nieces, Caitlin and Hannah and his dog, Marley. He was preceded in death by his parents. Friends may gather on Wednesday, from 3-7 p.m., at the Ansberg-West Funeral Home, 3000 Sylvania Avenue, (between Secor and Douglas Roads), for a celebration of John’s life. In lieu of flowers, contributions in memory of John may be made to Mercy St. Vincent Medical Center Auxiliary. Online condolences may be sent to the family at www.ansberg-west.com

The family of John C. Kopka created this Life Tributes page to make it easy to share your memories.