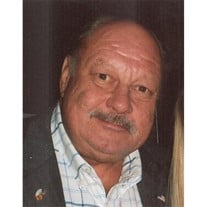 John James Moran Jr. “Bugsy” Jim Moran Jr. age 67, passed away peacefully on February 5, 2016 alongside his loving family. He was born in Toledo, OH. on August 31st, 1948 to Helen (Kanarowski) and Jack Moran. Jim was a graduate of Scott High School in 1966. He then enlisted in the United States Armed Forces in 1967. He served honorably in the “Big Red One” during the Vietnam War from ’68-’70 and was awarded the Bronze Star. Upon his return, Jim worked for GM Powertrain, retiring after 37 years. Jim married Sheila C. Enright in 1985 and later became the proud father of Allison (Brendan) Malone and Kevin. Big brother to Mary Lou (Garry) Clark, Michael Moran, Kathleen (Bob, deceased) Sobczak, Margaret (Bill) Foster and Joseph Moran. Jim is survived by his wife, children, brothers, sisters and many nieces, nephews, cousins and friends. An avid adventurer, Jim enjoyed spending time with his family and friends, road trips, great music, ICE cold beer, drawing and fireworks. With a positive attitude and a permanent smile on his face, he loved making people laugh. There was always a good time to be had and he was the life of the party, truly embracing his belief that life should be lived to the fullest. Friends and family are invited to visit on Wednesday February 10th from 2-8 p.m. , at Ansberg-West Funeral Home. Funeral services will be held at Ansberg-West Funeral home Thursday February 11th at 11:00 a.m. Special thanks to all family and friends and the angels of Hospice of Northwest Ohio. In lieu of flowers, the family appreciates memorial contributions to a Veterans charity of your choice or Hospice of Northwest Ohio. Here’s to you Dad! Hoorah!!!

The family of John J. Moran created this Life Tributes page to make it easy to share your memories.