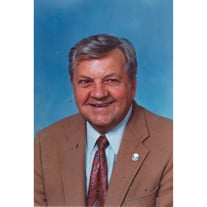 POTRZEBOWSKI John J. “Potts” John J. Potrzebowski, “Potts”, passed away Tuesday, October 14, 2014, at the Franciscan Care Center. He was born in Toledo on July 5, 1922, in the Polish Village to John C. and Clara (Wozniak) Potrzebowski. He was a graduate of St. Hedwig Elementary School and Woodward High School. He also attended C.C.C. in Rupert Idaho. In 1967 he attended The Toledo University Community College and received an Associate Degree in police work. He continued his education at The Toledo University Main Campus and received his B.A. in Public Administration. John was employed as a police officer with the Toledo Police Department. He was the president of his police academy class and retired in 1977, as a desk Sergeant. He was then appointed Chief of Police for Erie Township, MI, where he served until his retirement in 1987. He was member of and past commander of Police Post 512, American Legion, a charter member of post 5530 Frankowski Post VFW, the Toledo Fraternal Order of Police Lodge 40, the Police Retirees Association, and the Erie Township Rotary Club. John helped as an usher at St. Joseph Church in Erie, MI. He served his country honorably during WWII in the Army Air Force and was a radio operator, gunner, and was assigned to a B-29 bomber group in the South Pacific on the Island of Tinian in the Maria Islands. While on the island, John witnessed the Enola Gay take off en route for Japan. John enjoyed bowling, fishing, softball, and took great pride in his vegetable garden. His family and friends always enjoyed what he had grown. He leaves behind to cherish his memory, loving children, daughters, Mary Jo (Mike) McMillan, Anne (Robert) Hankenhof, Denise (Eamon) Keaveny, and Julie McDowell; sons, Mark (Sondra) Potrzebowski and Jeff (Laurie) Potrzebowski; 16 grandchildren and 15 great –grandchildren. He was preceded in death by his wife Virginia (Chmielowicz). They enjoyed 63 years together after their marriage at Sioux Falls SD, at the Army Radio School Chapel. Friends are invited to visit on Saturday, November 8, 2014, at 10 a.m. at St Hedwig Church, 2916 Lagrange Street, where the funeral mass will follow at 11 a.m. Burial will be at Calvary Cemetery. Memorial contributions may be made to Leader Dog for the Blind, 1039 S. Rochester Road, Rochester Hills, MI 48307. Ansberg-West Funeral Directors (419) 472-7633. Online condolences may be sent to the family at www.ansberg-west.com

The family of John J. Potrzebowski created this Life Tributes page to make it easy to share your memories.