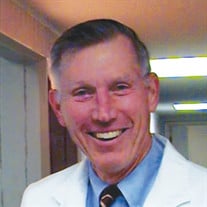 John Michael Wiley died peacefully in hospice in the presence of his family on November 24, 2018 after a 4 year battle with prostate cancer. John was born on March 12, 1938 in Toledo, Ohio, the middle son of Judge Frank and Elizabeth Wiley and graduated from DeVilbiss High School in 1956 and is a member of its athletic Hall of Fame. John met his wife of 54 years, Val, at The University of Michigan where he earned both a B.S. and D.D.S. There John played 1 year of basketball and 4 years of tennis finishing runner-up in Big Ten singles his senior year and winning the Big Ten Championship in doubles his junior and senior years. John continued to compete athletically winning the City of Toledo Tennis Singles Championship twice and the Doubles Championship once. He also loved playing squash and was able to win the city singles championship 6 consecutive years. He also played 1 year on an All-Ohio team that competed in a national tournament at Princeton University. John proudly served as a Captain in the U.S. Army, First Infantry Division, both in Fort Riley, Kansas and in Viet Nam supporting 4,000 infantry troops. Professionally, John practiced dentistry in Toledo for 47 years. John was a member of the Toledo Dental Society, the Dental Society of Ohio, and the American Dental Association. John also contributed to the community as a member of the Rotary Club of Toledo and American Legion Vernon McCune Post as well as serving as a past board member of The Toledo Tennis Club, The Toledo Club, and Inverness Club. John had a love of fishing, golf, gardening, bird watching and a respect for nature expressed in part by placing with friends over sixty wood duck nesting boxes throughout N.W. Ohio. John loved supporting his family and in later years especially enjoyed encouraging his grandchildren in various sporting and community endeavors. John is survived by his wife, Val, and three children, Anne Wiley, Joy Kight (Dan), and Jim Wiley (Amy), three grandchildren, Catherine, John, and Walker Kight, and brother Robert (Donna) Wiley. He was preceded in death by his parents, Judge Frank and Elizabeth Wiley and his brother David Wiley. Friends may visit the family on Sunday, December 2 at St. Michael’s in the Hills Episcopal Church (4718 Brittany Rd., Ottawa Hills, OH 43615) from 2 to 3 pm with a memorial service immediately following. In lieu of flowers, those wishing to express their support are asked to contribute to St. Michael’s in the Hills Episcopal Church, the Juvenile Diabetes Society (24359 Northwestern Hwy, Suite 125, Southfield, MI 48075; ph: 248-355-1133.), The University of Michigan Athletic Development - Men’s Tennis, please note John M. Wiley (1000 S. State Street, Ann Arbor, MI 48109), or a charity of your choice. Arrangement have been entrusted to the Ansberg-West Funeral Directors, 419-472-7633. To send his family online condolences, please visit www.ansberg-west.com.

John Michael Wiley died peacefully in hospice in the presence of his family on November 24, 2018 after a 4 year battle with prostate cancer. John was born on March 12, 1938 in Toledo, Ohio, the middle son of Judge Frank and Elizabeth Wiley and... View Obituary & Service Information

The family of John Michael Wiley created this Life Tributes page to make it easy to share your memories.

John Michael Wiley died peacefully in hospice in the presence...