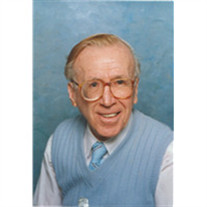 Joseph “Pat” McPartland, passed away Sunday May 9, 2010, at the age of 91. He led a full life and was very generous with both his time and resources to benefit the welfare of others. A veteran of World War II, he served with the 29th infantry division, the 115th at the Rhine and AMGOT (Allied Military Government Occupied Territory) responsible for the revision and rebuilding of war torn Germany. Pat was a 50 year member of Walter-Weller American Legion post 135. Following the war, he went to work for Walding Kinnan and Marvin the predecessor of AmeriSource Bergan. Here he introduced the corporation to the Teamsters Union by organizing the workers. He served 45 years as the Chief Steward, and brought many new benefits to the employees. He also did much for the overall stability of the corporation, including the prevention of a takeover that would have eliminated the Toledo operation. Within the union itself, he was elected an alternate delegate to the international convention by three different presidents and served on many of the local committees. Having lived the first 60 years of his life in East Toledo, he was one of the foundering fathers of ETCO (East Toledo Community Organization) that created many innovations that improved the quality of life for many in this neglected part of Toledo. He attended Good Shepherd grade school, Waite High School and later Davis Business College. A lifelong member of Good Shepherd Church, he was a past president of the Parish Council. Pat was an avid golfer and bowled in many leagues throughout the city. Joseph was preceded in death by his parents, Edward and Mary (Kelly) McPartland, sisters, Mary, Helen, Gertrude, Catherine, Marguerite; brother, Edward and nieces, Cathy and Barb McPartland. He is survived by his nephews, Greg Cavill, Joe (Precilla) McPartland, Dave McPartland and Denny (Teri) McPartland. Mass of the resurrection will be celebrated 10:00am Friday at Good Shepherd Church. Friends are invited to visit from 2:00 to 9:00pm Thursday in the Ansberg-West Funeral Home 3000 Sylvania Avenue. Interment in Calvary Cemetery. Memorial contributions may be made to Good Shepherd Church 550 Clark Street, Toledo, Ohio 43528. Online condolences may be left at www.ansberg-west.com

Joseph &#8220;Pat&#8221; McPartland, passed away Sunday May 9, 2010, at the age of 91. He led a full life and was very generous with both his time and resources to benefit the welfare of others. A veteran of World War II, he served with the... View Obituary & Service Information

The family of Joseph McPartland created this Life Tributes page to make it easy to share your memories.