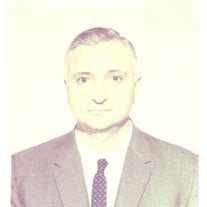 Joseph Romito, 96, of Toledo, Ohio passed away on November 19, 2014 at Elizabeth Scott Nursing Facility. Joseph was born on September 29, 1918 in Bedford , Ohio to Michele and Letizia Romito. He graduated from Bedford High School in 1935, and Kent State University in 1939 with a degree in accounting. He met and married the love of his life, Elizabeth DeSantis, on May 3, 1941. They remained married for 65 years until her death in 2007. In 1942 he joined the U.S. Navy. He served honorably for four years. He was Lieutenant JG aboard a warship in the Pacific. After the war he worked for the U.S. General Accounting Office in Cleveland. In 1948 he moved to Toledo and became a Special Agent for the Internal Revenue Service. He retired in 1972. He was a member and director of the Alba Club and a member of St. Catherine Church. He is survived by his children, Richard, Eddie (Kyoko), Rebecca (David) Schmitz; grandchildren, Tony, Angela, Joey, Nick, Aarron; 10 great-grandchildren; step-grandchildren, Paula Muething and Rebecca Harrott brothers Nicky Spikowski and Roland. He was preceded in death by siblings, Victor, Tony, Herman, Alfonso, and Mary Hlavach. Friends are invited to visit from 2-4 and 6-8pm on Sunday November 30, 2014 in the Ansberg-West Funeral Home, 3000 Sylvania Ave. Friends may also visit after 9:00am on Monday December 1, 2014 at St. Catherine Church, 4555 North Haven Ave. where the Mass of the Resurrection will begin at 10:00am. Rev. Francis Speier Officant. Interment will be private in All Saints Cemetery in Northfield, Ohio. Those wishing to send memorial contributions are asked to consider St. Catherine Parish. To send his family online condolences, please visit www.ansberg-west.com. The family wishes to extend special thanks to the staff at Elizabeth Scott for the fine care that they provided over the last several months.

Joseph Romito, 96, of Toledo, Ohio passed away on November 19, 2014 at Elizabeth Scott Nursing Facility. Joseph was born on September 29, 1918 in Bedford , Ohio to Michele and Letizia Romito. He graduated from Bedford High School in 1935, and... View Obituary & Service Information

The family of Joseph R. Romito created this Life Tributes page to make it easy to share your memories.