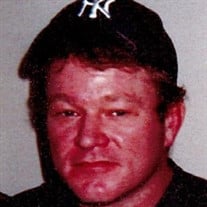 Joseph V. Stemen, Sr., age 49, passed away unexpectedly on January 18, 2021. Born to Robert and Dolores (Sattler) Stemen on March 15, 1971, he was a 1989 graduate of Start High School. He was an insulator with Local 45 Insulators for many years. Joe was known for his great sense of humor. He never heard an ornery joke that he didn’t like, or didn’t love to tell. Joe never passed up the chance to play euchre with his family when they came to town. He was a huge fan of the Dallas Cowboys, the Ohio State Buckeyes, and when baseball season came around, you can bet he would be rooting for his favorite team, the New York Yankees. Joe leaves behind, with very heavy hearts, his son Joseph Jr., daughter Jennifer, grandson Brayden, granddaughter Jaycee, and mother Dolores Stemen as well as special aunts Patricia Neidigh and Judy Sattler. He also leaves behind several cousins, who loved him dearly. He was preceded in death by father Robert Stemen Sr., brother Robert Jr., grandmothers Florence Stemen and Cecilia Kovacs, uncle Ronnie Sattler, aunt Pat Davies and cousin Tammy Winters. Visitation will be on Sunday, January 24th from 2-6 p.m. at Ansberg-West Funeral Home, 3000 W. Sylvania Ave, Toledo, Ohio 43613. Services will follow on Monday,January 25th at 1 p.m. Joe will be laid to rest at Ottawa Hills Memorial Park, next to his brother and best friend, Bobby. Contributions in Joseph’s memory may be made to the Wounded Warriors Project(www.woundedwarriorproject.org.) Joe will be remembered for always having a smile on his face, his witty jokes, and for giving the best hugs. Rest in peace Joe….you are loved and will be dearly missed by all.

Joseph V. Stemen, Sr., age 49, passed away unexpectedly on January 18, 2021. Born to Robert and Dolores (Sattler) Stemen on March 15, 1971, he was a 1989 graduate of Start High School. He was an insulator with Local 45 Insulators for many years.... View Obituary & Service Information

The family of Joseph V. Stemen Sr. created this Life Tributes page to make it easy to share your memories.