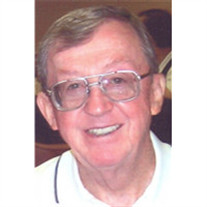 Jude F. Sutter, devoted husband and respected attorney, was called home by the Lord on Monday, December 31, 2012. He passed away peacefully at home surrounded by his loving family. Jude was born in Toledo, Ohio, on April 26, 1929, to Frank and Jane (Meyers) Sutter. He was a 1947 graduate of Central Catholic High School and an Army veteran of the Korean War. He attended the University of Detroit and later secured his law degree in 1959 from the University of Toledo law school. Jude's career began in the Spitzer Building in downtown Toledo working with his mother, also an attorney, and Matt Kolb. Later he moved his office to Laskey Road, practicing alongside Kroncke, D'Arcangelo, and Furey. Jude was a member of the Ohio State Bar Association from 1959 until his death. In 2009 he was honored by the bar association for his fifty years of service. During Jude's years of service to the Toledo community, he ran for judge of the county courts, was secretary of the Lucas County Bar Association, and was a member of the Delta Theta Phi law fraternity. He also served on the Judge's Committee of Notary Public and as president of the University of Toledo Law Alumni Association from 1974-75. He volunteered his time to individuals on behalf of the Pro Bono Legal Services Program. In addition to his law career, Jude was and active member of Christ the King Church where he was a lecturer, an Extraordinary Minister of Holy Communion, and third degree, Knights of Columbus. He was a volunteer at St Anne's hospital for five years, a member of the Toledo Council of the Blind, and a member of the Old Newsboys Goodfellow Association. For recreation Jude enjoyed weekly dancing with his wife Anna and traveling with her to Florida and Myrtle Beach. Left to cherish his memory are his wife, Anna Bogedain Sutter; daughter, Sandy Sutter Pollex.(Robert C.); daughter, Kat (Kathy) Sutter; son, Scott Sutter (DJ Hawk); grandson, Shawn Sutter (Ashley); stepson, Bob Nash (Cindy); stepdaughter, Anna (Honey) Nash-Friedman; and stepson, Don Nash (Carol). Jude is also survived by his sister, Mary Hunter; sisters-in-law, Jacqueline Sutter and Carol Knuth Ferrara; and brother-in-law, Donald Knuth (Maryhelen). Jude's and Anna's extended families include numerous grandchildren, step grandchildren, great grandchildren, step great grandchildren, nieces and nephews. Jude was preceded in death by Nancy Knuth Sutter, his wife of fifty years; sister, Kathleen McAvoy; brother, James Sutter and brothers-in-law, Ray Hunter and Samuel Ferrara. Jude's family wishes to thank nurse Jennifer Huber for her loving care this past year; Hospice of Northwest Ohio; and Father Bill Rose, Pastor of Christ the King Church for his visits. Friends are invited to visit from 3:00 to 8:00pm Friday at the Ansberg-West Funeral Home 3000 Sylvania Avenue where the Rosary will be recited at 7:00pm. Mass of the Resurrection will be celebrated by Father Bill Rose, 10:00am Saturday at Christ the King Church, 4100 Harvest Lane. Interment will follow in Lumen Christi Mausoleum at Resurrection Cemetery. The family suggests tributes to Hospice of Northwest Ohio, Alzheimer's Association of Northwest Ohio, Christ the King Church, and Northwest Ohio Underdog Rescue.

Jude F. Sutter, devoted husband and respected attorney, was called home by the Lord on Monday, December 31, 2012. He passed away peacefully at home surrounded by his loving family. Jude was born in Toledo, Ohio, on April 26, 1929, to Frank and... View Obituary & Service Information

The family of Jude F Sutter created this Life Tributes page to make it easy to share your memories.