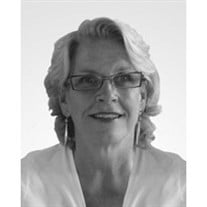 Julia Brooks LaRue Orwig, beloved wife of Kenneth Orwig, Jr. Entered the Kingdom of Heaven at 12:53 p.m. On Saturday, September 13, 2008. Her husband, two sons, two grandchildren and daughter-in-law were at her side. ? Julia was born and raised in Hodgenville, LaRue County, Kentucky. After graduation from Agnes Scott College, Decatur, Georgia, she moved to Toledo to become Ken's wife. ? She was a partner to her husband in every way including professionally. Julia provided marketing, public relations, and government affairs counseling to their clients, which include local non-profits, businesses and government agencies as well as the world's largest retail corporation. Julia held the APR accreditation of the Public Relations Society of America, a certification achieved by fewer than five percent of public relations professionals in the United States. ? Julia Orwig was also a devoted mother and grandmother. She and her husband cared for their granddaughter for 18 months when Julia's oldest son was deployed to the Middle East for the first time in 2004. Then in 2007, Julia was the Lamaze partner to her daughter-in-law during his second deployment and participated in the birth of her first grandson, Kenny, IV. ? She had a longtime commitment to her adopted home of Toledo and was a graduate of both Leadership Toledo and Leadership Ohio. ? Julia was president of the Junior League of Toledo in 1992-93. She also chaired the League's Town Hall Lecture Series and Toledo After Hours event. Julia continued to be very active in the League and had just completed a second term as the Sustainer Representative to the Board of Directors at the time of her death. ? Her involvement in community leadership ran deep. At various times, Julia served on the boards of the Medical University of Ohio Foundation; the University of Toledo Foundation; The Valentine Theatre; Historic Woodlawn Cemetery; Toledo Botanical Garden; Sunset House; the YWCA; and the Toledo Chapter, Public Relations Society of America of which she was also a past president. ? A strong proponent of voluntarism, she never shied from hands-on community service. During the course of her career, she worked on the Toledo Symphony Orchestra Fund Drive; was a United Way Team Captain; a 15-year volunteer to the Mothers' Support Group of Ottawa Hills Schools; and a volunteer at Ronald McDonald House. She served on the United Way Voluntary Action Center Advisory Committee; the CARES Advisory Committee and the "Success By 6" Steering Committee. ? In 1993, she co-chaired the Diamonds in the Snow fundraiser for the Toledo Chapter, American Red Cross with her husband, Ken. Julia and Ken also co-chaired the public relations committee for the 1988 ToledoFest. She was a co-chair of Special Events for the 2007 Jamie Farr Owens Corning Classic. ? At the state level, Julia served on the board of Leadership Ohio and the board of the Ohio Division of the American Association of University Women. She founded the Detroit/Toledo Agnes Scott College Alumnae Club. ? Although not active with the organization, she was inducted into the Daughters of the American Revolution in 1970. In 1977, she was named an Outstanding Young Woman of America. ? Julia Orwig is survived by her husband of 35 years, Kenneth Ray Orwig, Jr.; sons, Kenneth Ray (Ginger) Orwig, III of Woodville, OH and Philip LaRue Orwig of Dallas TX; grandchildren, Kenneth Ray Orwig, IV and Natalya Cameran Orwig; father James D. LaRue, Jr.; brothers John (Eva) LaRue, Alex (Iris) LaRue, Will Larue, Philip (Debbie) LaRue, Ben (Laura) LaRue, and Steve LaRue; and sister, Paula (John) Varney and many nieces, nephews and cousins. ? Visitation will be at the Ansberg West Funeral Home, 3000 Sylvania Avenue on Wednesday, September 17 from 3:00 p.m. Until 8:00 p.m. A service will be held in St. Michael's in the Hills Episcopal Church, 4718 Brittany Road in Ottawa Hills on Thursday, September 18 at 11:00 a.m. Julia will be placed to rest in the Memorial Garden at St. Michael's. The interment service will be private. ? The family is grateful to the oncology unit of the University of Toledo Medical Center and both the in-patient and out-patient staff of Hospice of Northwest Ohio for their kind and loving care. ? Memorial Donations may be made to the Junior League of Toledo Endowment Fund. ? ### ? ? ? ? ? ?

Julia Brooks LaRue Orwig, beloved wife of Kenneth Orwig, Jr. Entered the Kingdom of Heaven at 12:53 p.m. On Saturday, September 13, 2008. Her husband, two sons, two grandchildren and daughter-in-law were at her side. ? Julia was born and raised... View Obituary & Service Information

The family of Julia Brooks LaRue Orwig created this Life Tributes page to make it easy to share your memories.