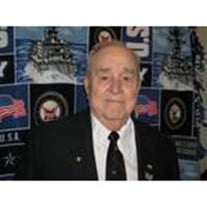 Karl Thomas Petersen, 85, departed this world on September 19, 2010. He was born in Toledo on August 29th 1925 the last of four brothers to Leona (Bruhl) and Cornelius Petersen. During his youth, he sold newspapers and was a member of the Boy Scouts. He attended Macomber High School until he joined the U.S. Navy at the age of 17. He served his country honorably during World War II as a radioman on the LST 911. Karl was discharged on his 21st birthday in 1946 after which he returned to Macomber to finish his schooling. He met and married the love of his life, Rita Catherine Knaggs, on July 31st 1948 and together they successfully raised five children. He became a tool and die designer and retired the 1st time from Sharon Manufacturing, but soon returned to work at Peterson Engineering until age 75. During the 50's and 60's he was active in the Knights of Columbus and various parish activities at St. Clement and Blessed Sacrament Parishes. He was a member of the United States LST Association where he remained the treasurer until his death. After his wife of 58 years passed away he became involved with the American Legion Post 587 where he had the honor of being elected Post Commander in 2010. He was also a member of VFW Post 606, the Navel Memorial Association, and the North Toledo Sportsman's Club. Any spare time left in his later years was spent walking his dog Ike, emailing friends, watching sports, playing poker, and following the activities of his grandchildren. Karl was preceded in death by his wife Rita and his three brothers Corny, Bud and Jim. He is survived by his loving children, Kap (Dave) Junge, Kip Petersen, Lauri Skay (Daniel Cunningham), Paula Roze-Petersen (Dan Skay), and Neal Petersen. In addition, he will be missed by his grandchildren Sarah (Karl) Wolpert, Kale (Kelly) Junge, Jenna (Josh) Way, and Deanna Skay, three great grandchildren Jaden and Joseph Way and Myla Junge, numerous nieces and nephews, many life long friends, and his best friend and dog Ike. His family wishes to extend many thanks to the doctors and staff of the ICUs at Toledo Hospital and to the staff of Hospice of Northwest Ohio who helped him move on. His charity, compassion, friendship and silent good were immeasurable and will be sorely missed. May God bless him. Friends are invited to visit after 11:00AM on Thursday September 23, 2010 in the Blessed Sacrament Church where the Mass of the Resurrection will immediately follow beginning at 12:00 Noon. Rev. John Stites Officiant. Interment will be private. In lieu of flowers please make any donations to Hospice of Northwest Ohio. Arrangements have been entrusted to the Ansberg-West Funeral Directors, 419-472-7633. To send the family online condolences, please visit www.ansberg-west.com. I am home in heaven, dear ones: Oh, so happy and so bright! There is perfect joy and beauty In this everlasting light. All the pain and grief is over, Every restless tossing passed: I am now at peace forever, Safely home in Heaven at last.

Karl Thomas Petersen, 85, departed this world on September 19, 2010. He was born in Toledo on August 29th 1925 the last of four brothers to Leona (Bruhl) and Cornelius Petersen. During his youth, he sold newspapers and was a member of the Boy... View Obituary & Service Information

The family of Karl Thomas Petersen created this Life Tributes page to make it easy to share your memories.