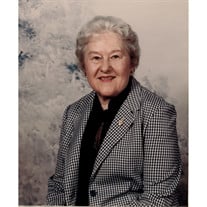 Kathryn M. Miller, 96, of Toledo, passed away Thursday, February 18, 2016, at Heartland of ProMedica. She was born June 16, 1919, in Middletown, PA, and was the daughter of Russell and Kathryn Hershberger. Kathryn grew up in Pennsylvania and met her husband Walter, in Toledo, where they were married. She was a member of Unity, Conclave #2 of the True Kindred, and a longtime member of the Lotus Chapter #477, Order of Eastern Star. Kathryn was a homemaker along with working various jobs. Survivors include her daughters, Carol (Dawn H.) Peters and Debbie O’Leary; step-daughter, Gladys (Dave) Smith; step-son, George Miller; several grandchildren, great-grandchildren and longtime friend, Gladys Cox. She was preceded in death by her parents; husband, Walter Miller; and brothers, Charles Hershberger, George Hershberger and Russell Hershberger. Friends are invited to visit from 2-8 p.m. Monday, in the Ansberg-West Funeral Home, 3000 Sylvania Avenue (between Secor and Douglas Roads), where Eastern Star services will be held at 7 p.m. Funeral services will be held Tuesday, at 11 a.m. from the funeral home with Reverend Thomas Broyles and Rev. Clarence Gardner officiating. Interment will follow in Ottawa Hills Memorial Park. Memorial contributions may be made to Heartland of ProMedica. The family would like to extend a special thanks to Heartland of ProMedica (Hospice), for the wonderful care that was given to Kathryn, especially Jewel and Diane and the rest of the staff. We miss you now, our hearts are sore. As time goes by we miss you more. Your loving smile, your gentle face. No one can take your vacant place. Online condolences may be sent to the family at www.ansberg-west.com

Kathryn M. Miller, 96, of Toledo, passed away Thursday, February 18, 2016, at Heartland of ProMedica. She was born June 16, 1919, in Middletown, PA, and was the daughter of Russell and Kathryn Hershberger. Kathryn grew up in Pennsylvania and... View Obituary & Service Information

The family of Kathryn M. Miller created this Life Tributes page to make it easy to share your memories.