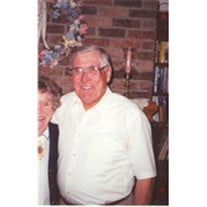 NIEHAUS Keith E. Keith E. Niehaus, 84, passed away on Monday, October 1, 2007, in The Toledo Hospital. He was born in Genoa, Ohio on May 31, 1923, to Robert and Ethel (Weidner) Niehaus. Keith was a graduate of Genoa High School, class of 1941, where he graduated as salutatorian. He began working for Pure Oil Co. in 1943 as a pipe fitter and retired from Union Oil Co. of Lemont, IL (formerly Pure Oil Co.) where he was a supervising planner. He retired after 40 years. Keith was a former deacon and trustee at Eastminster Presbyterian Church and was currently a faithful member of Christ Presbyterian Church. He had also been a member of the Masons and the Elks. He was an avid sportsman and had formerly bowled in several leagues and currently golfed in two leagues. He was a huge fan of the Ohio State Buckeyes, the Cleveland Browns, Indians and Cavs. He was married on June 10, 1944, to his loving wife of 63 years, Margaret, who survives him. Also surviving are his daughter, Kathy (Chuck) Rubinstein of Napoleon, OH; grandchildren, Jeremy (Shari) Rubinstein, and Jenna (Brent) Gray, also of Napoleon; great-grandchildren, Tate, Drew, Tanner, Calen, Trey and a baby due in the spring; sister, Carol Tank of Williston, OH; brother-in-law, Ernie Love of Toledo, and many nieces and nephews. Friends are invited to visit on Thursday, October 4, 2007 from 5-8 p.m. in the Ansberg-West Funeral Home, 3000 Sylvania Ave., where funeral services will begin at 11:00 a.m. Friday, with visitation one hour prior to the service. Rev. Thomas Schwartz of Christ Presbyterian Church is officiant. Interment will be in Ottawa Hills Memorial Park. Those wishing to make memorial contributions are asked to consider Christ Presbyterian Church of Toledo, First Presbyterian Church of Napoleon, or a charity of the donor's choice.

The family of Keith E. Niehaus created this Life Tributes page to make it easy to share your memories.