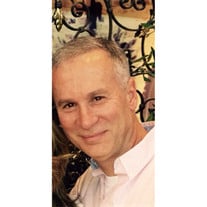 Kip B. Lewton, a retired Bureau of Criminal investigation (BCI) Special Agent, assigned with the Drug Enforcement administration (DEA) for over 18 years, and lifelong resident of Toledo, Ohio, died unexpectedly on July 4, 2017, at the age of 54. Kip was born in Toledo, on August 7, 1962. He graduated from Saint Francis de Sales High School and went on to earn a Bachelor’s degree in Criminal Justice from the University of Toledo. Kip had a driving passion to serve his community and a commitment to perform his job at the utmost level, his first job in law enforcement was working as a patrol man for Ottawa Hills Police Department. He then went on to serve as a BCI agent for 30 years earning a multitude of commendations. After retiring from BCI, Kip worked as a gaming supervisor for the state of Ohio at the Hollywood Casino. Kip was a loving father and friend to everyone who had the chance to meet him. He was disciplined and spent much of his time at the dojo, earning a black belt in aikido. A selfless man he continued to share all that he learned through various classes including women’s self-defense in his final weeks. Never satisfied with just sitting around, Kip spent many afternoons riding his motorcycle throughout Toledo to unwind after a long day. Kip is survived by his wife, Gina; his sons, Benjamin, Jacob, and Noah; his sisters, Laurie (Mark) Rigg and Cindy (David) Nissen; and many nieces and nephews. He was preceded death by his parents, Chester and Rosemary; and his brothers, Victor and Jeffery. Family and friends are invited to visit on Monday, July 10th, from 3- 8 p.m., at the Ansberg-West Funeral Funeral Home, 3000 Sylvania Avenue, (between Secor and Douglas Roads), where funeral services will be held on Tuesday, July 11th, at 11 a.m. Interment will follow at Ottawa Hills Memorial Park. Online condolences may be sent to the family at www.ansberg-west.com

Kip B. Lewton, a retired Bureau of Criminal investigation (BCI) Special Agent, assigned with the Drug Enforcement administration (DEA) for over 18 years, and lifelong resident of Toledo, Ohio, died unexpectedly on July 4, 2017, at the age of... View Obituary & Service Information

The family of Kip B. Lewton created this Life Tributes page to make it easy to share your memories.

Kip B. Lewton, a retired Bureau of Criminal investigation (BCI)...