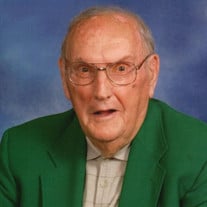 Lawrence L. Spencer "Larry", beloved husband, father, grandpa and great-grandpa died January 18, 2020 in Toledo at the age of 90, surrounded by family. Larry was born February 9, 1929 in Syracuse, NY to Charles and Helen Spencer. He attended Fayetteville High School, in New York and Staunton Military Academy, in Virginia. He was a four-sport athlete and a New York sprint champion. Upon graduation, Larry was drafted by The Brooklyn Dodgers but instead chose to attend Wake Forest College on a football scholarship, graduating in 1954. While at Wake Forest, Larry met Mary Finberg. They were married on August 22, 1953 in Wilmington, NC and enjoyed 61 years together. During his football career at Wake Forest, Larry led the nation in kickoff returns, averaging 42.2 yards per return, an NCAA record that held for 22 years. He still holds three Wake Forest football records today. Larry’s skill on the football field led to him being drafted by the Detroit Lions in 1953. After his time with the Lions, Larry served as a 1st Lieutenant in the U.S. Army Chemical Corps and was honorably discharged in 1957. Larry then began a long career, with the YMCA, holding various positions throughout New York, relocating to Toledo in 1967. He finished his YMCA career as Executive Director of the South Toledo branch. Larry then worked at Finance Systems of Toledo before retiring in 1996 as the Vice President of Sales & Service. In addition to being a member and past President of the Downtown Toledo Kiwanis Club, he was a member of First Baptist Church of Greater Toledo for 53 years. He served the church as Chairman of the Board of Trustees, the Board of Deacons, and the Men’s Fellowship. He was also Deacon Emeritus and a member of the Chancel Choir. While Larry’s accomplishments are admirable, he’ll be most remembered by those closest to him for being kind in nature, humble in spirit and an unsuspectingly funny man, who above all, deeply loved and cared for his family. Larry is preceded in death by his wife, Mary, his parents and two sisters. He is survived by his four sons, Larry Jr. (Becky) of Jackson, MI; Jay (Monica) of Springfield, OH; Todd (Katy) of Phoenix, AZ; and David (Beth) of Toledo, OH; his grandchildren, Sean Spencer, Shannon Spencer, Courtney (Brian) Wayne, Molly (Alex) Meddock, Alex (Alexa) Spencer, Stephanie Spencer (Matthew Vock), Allison, Emily, Madison, and T.J. Spencer; his great-grandchildren, Gibson, George and Jude Wayne, Spencer and Savannah Opsincs, Rosie and James Meddock, and Grace Spencer; and his sister, Frances Williams of Zephyrhills, FL. Friends may visit the family Saturday, January 25, 2020 from 1 p.m. to 2 p.m. at First Baptist Church of Greater Toledo; 6520 Pilliod Rd. Holland, OH 43528. A memorial service will begin at 2 p.m. Memorial donations can be made in his name to First Baptist Church of Greater Toledo or The Deacon Club, Wake Forest University, 499 Deacon Blvd, Winston-Salem, NC 27105.

The family of Larry L. Spencer created this Life Tributes page to make it easy to share your memories.