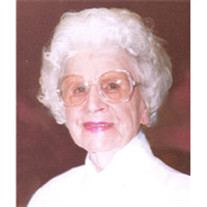 Lene Bauer, age 97, the widow of Alfred F. Bauer, former general manager of Doehler-Jarvis, Inc., died March 6, 2010 at St. Luke's Hospital. A native of Germany, Mrs. Bauer lived in Toledo since 1951, in the Westmoreland neighborhood, Ottawa Hills, and Swan Creek Retirement Village, where she resided the past 17 years. A member of Memorial Lutheran Church, she was active in several of it's organizations most notably the Altar Guild, on which she served for many years. Other memberships included, the Toledo Museum of Art, The Toledo Club, and Inverness Club, where she was a member of the Nine-Holers group. In addition to playing golf, Mrs. Bauer enjoyed to travel. She and her husband traveled extensively through Europe, Australia, and Japan. Also a fine skier, she skied in Europe with her husband and made many ski trips to northern Michigan with her family. Mr. Bauer died May 20, 1974. Mrs. Bauer enjoyed many cultural events, particularly attending subscription concerts of the Toledo Symphony. She also enjoyed regular visits to the Toledo Museum of Art as well as programs offered by the museum. A beloved mother, grandmother, and great grandmother, known for her kindness, generosity and devotion to her family, Mrs. Bauer is survived by her sons, Wolfgang (Carla) and Peter (Antoinette) Bauer; daughter, Rose (Robert) Wagner; 6 grandchildren and 11 great grandchildren. Services will be 11:00am Wednesday at Memorial Lutheran Church with Rev. Craig Scholl officiating, where friends are invited to visit after 9:00am. Interment will follow at Ottawa Hills Memorial Park. Those planning an expression of sympathy are asked to make contributions to The Toledo Symphony or Memorial Lutheran Church. Arrangements entrusted to Ansberg-West Funeral Directors. Online condolences may be left at www.ansberg-west.com

The family of Lene Bauer created this Life Tributes page to make it easy to share your memories.