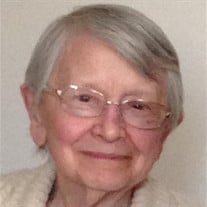 Leona "Nonie" Diehl passed away at her home in West Toledo on Tuesday, April 30. She was 93. Nonie was born April 3, 1926, in Toledo’s Polish Village. Nonie was the youngest of ten children born to Anna (Kosiba) and Stanislaw Kolebuk. She graduated from St. Hedwig’s School, Central Catholic High School and St. Vincent’s School of Nursing. She worked as a nurse at St. Vincent’s Hospital and spoke fondly of that work throughout her life. It was during that time that she met Harvey Diehl who would become her spouse of 47 years. They married on May 26, 1951. Shortly after their marriage, they relocated to California and began their family together. They had eight children: one son and seven daughters. In 1961, they relocated back to West Toledo and moved into the home where they would spend the remainder of their lives. She was an exceptionally selfless and generous person, always putting other people first, especially her husband and her children. Just when she was finishing her child-rearing, she welcomed her daughter and her two young granddaughters into their home and helped to raise her granddaughters. She was devoted to the rest of her family as well, making weekly visits to her siblings. She and Harvey were loyal members of Blessed Sacrament Parish and attended daily Mass for decades. She contributed immensely to the community at Blessed Sacrament often volunteering for the parish wherever it was necessary. She would bake for charity bake sales (particularly her famous cheesecake!), work at blood drives, participate in perpetual adoration and sing at funeral masses. She also volunteered at the Blessed Sacrament School library. In addition to that enjoyed working the voting polls on election days. Nonie was an avid reader who loved going to the library. She also enjoyed working in the yard, shopping trips with lunches out with her daughters and grandchildren. She was an amazing cook and enjoyed having her family over for Sunday dinner. And boy did she like her chocolate! One of her favorite things in her later years was getting together with friends for a burger and beer. She was preceded in death by her husband, Harvey, her daughter Karen, her son-in-law Tom Metzger; her parents and siblings. She is survived by her loving children Jim, Teri, and Lisa Diehl, Mary Ann (Larry) Lacure, Anita Metzger, Helen and Dee-Dee Diehl; her grandchildren Andrea Dixon, Renee Dixon (Matt Barrett), Adam Metzger, Tony Metzger, Zachary Lacure, Alexandra Lacure, & Rachel McAllister (Robert); and her great-grandchildren Emma Rose McAllister and Maryann Barrett. In the final years of her life, she was cared for by her devoted daughter, Lisa. A special thanks to Karen, her loyal caregiver for the last several years, and to Hospice of Northwest Ohio. Visitation hours will be held at Ansberg-West Funeral Home on Sunday, May 5, from 1- 6 pm with a rosary service at 5:30 pm. Funeral services will be held at Most Blessed Sacrament Church at 11 am on Monday; interment will follow at Calvary Cemetery. In lieu of flowers, the family requests donations be made to Most Blessed Sacrament Parish and St. Vincent Alumni Association (reference: Sr. Cousineau Memorial).

Leona "Nonie" Diehl passed away at her home in West Toledo on Tuesday, April 30. She was 93. Nonie was born April 3, 1926, in Toledo&#8217;s Polish Village. Nonie was the youngest of ten children born to Anna (Kosiba) and Stanislaw Kolebuk.... View Obituary & Service Information

The family of Leona "Nonie" Kolebuk Diehl created this Life Tributes page to make it easy to share your memories.

Leona &quot;Nonie&quot; Diehl passed away at her home in West Toledo on...