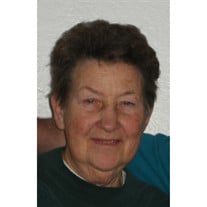 Leota L. “Lee” Baldwin, 81, of Toledo, passed away Monday, January 11, 2016, at Heartland of Waterville. She was born August 17, 1934, in Bedford, PA and was the daughter of Glenn and Lillie Allison. Leota moved to Toledo in the late 1950’s. Lee was a bartender for 45 years and worked for many establishments during that time, including the Owl Lounge, which she and her husband William, owned and operated. Lee finally retired as a bartender from the Fraternal Order of Eagles 197, where she was also an auxiliary member. She was also a member of the Order of the Eastern Star. Survivors include her son, William O. (Debra) Baldwin of Toledo; grandchildren, William R. (Laura) Baldwin of Swanton, OH and Sarah A. Baldwin of Stillwater, OK; great-grandchildren, Leah, and quadruplets- Madalyn, Reghan, Logan and Ryan; brother, Norbert and sister, Pearleen. Leota was preceded in death by her husband, William L. Baldwin and 3 brothers. Friends are invited to visit on Friday from 11 a.m. until the funeral service at 1 p.m., in the Ansberg-West Funeral Home, 3000 Sylvania Avenue, (between Secor and Douglas Roads). Interment will follow in Toledo Memorial Park. In lieu of flowers memorial contributions may be made to the Alzheimer’s Association. Online condolences may be sent to the family at www.ansberg-west.com

The family of Leota L. Baldwin created this Life Tributes page to make it easy to share your memories.