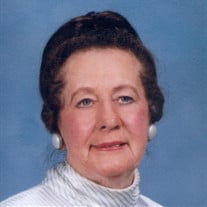 Lois Martha Densmore, 97, died on April 9, 2019, in Roanoke, Virginia. Born in Pennsylvania on June 4, 1921, she moved to the Toledo, OH area as a child with her parents, Harold Andrew and Dorothea V. (Roloff) Ery. Lois was married to Warren Densmore, Executive Director of the East Toledo Family Center, for 47 years. Mr. Densmore was a World War II veteran, having served in the Pacific Theater. He preceded her in 1994. In the Toledo area Lois was a strong supporter of the Activities Center for Handicapped Children, an active member of the League of Women Voters, The Toledo Opera Guild, The Toledo Museum of Art and Brandywine Country Club. Lois was a long-time member of Our Saviour Lutheran Church in Toledo. Lois moved to Roanoke, Virginia in 2000, to be near her son and family. In Roanoke, Lois became active in the Red Hats, La De Da’s, and the Newcomers Club. She also served as a docent at the Roanoke Museum of Art. Lois loved opera, enjoyed playing bridge and was an ardent Pittsburgh Steelers fan. Lois is survived by her loving son, Douglas Densmore, grandsons, Andrew F.D. Densmore and Bradley W. (Heather) Densmore and great-grandchildren, Olivia Grace and Ian Conner Warren of Toledo, OH, of whom she was immensely proud. She was preceded in death by her daughter-in-law, Janet Broadley Densmore. Lois brought her cheerfulness, sense of humor, joy for living, thoughtfulness and kindness to everyone with whom she came in touch. She was proud that she remained independent and active through her later years. Lois always said that her rule of daily living was to make everyone who passed her way that day a little happier. Her soul has gone to a better place that will be made better still because she is there. Family and friends are invited to visit on Sunday from 2-5 p.m., at the Ansberg-West Funeral Home, 3000 Sylvania Avenue, (between Secor and Douglas Roads), where funeral services will be held on Monday at 10 a.m. Rev. Brenda Peconge will officiate. Interment will follow at Historic Woodlawn Cemetery. The family requests memorials to be made to the Warren Densmore Scholarship Trust, c/o The Warren Densmore Building, 1020 Varland Avenue; Toledo, OH 43605. The family gives special thanks to Barbara Benson, Bill Brand, Kim Alouf, and Meagan Martin who provided so much assistance and love over the years and to Denise Hairston, her caregiver, who became her great friend during her final weeks.

Lois Martha Densmore, 97, died on April 9, 2019, in Roanoke, Virginia. Born in Pennsylvania on June 4, 1921, she moved to the Toledo, OH area as a child with her parents, Harold Andrew and Dorothea V. (Roloff) Ery. Lois was married to Warren... View Obituary & Service Information

The family of Lois Martha Densmore created this Life Tributes page to make it easy to share your memories.