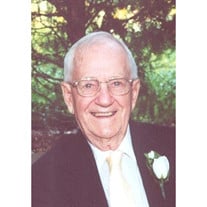 Louie passed away peacefully surrounded by his family on March 4th, 2014 at the age of 96. He was born on February 1, 1918 to Steve and Rose (Forgacs) Olah as one of 10 children. He attended Birmingham School and Waite High School. He was an amateur boxer in the 1930’s. Louie was also a WWII Veteran, honorably serving in the U.S. Army. Prior to his retirement he was employed by G.M. Powertrain until 1983. He was very active in Mutual Federal Credit Union for 30 years, serving as secretary, treasurer, and chairman of the board of directors. After his retirement, he became active in Local # 14 Retirees Chapter serving as secretary and vice president for over 20 years. He was a longtime member of St. Agnes Parish where he served as an usher for 27 years. He was also active in coaching Little League Baseball. Louie was preceded in death by his wife of over 66 years, Mary Jeanne. He is survived by his children, Jerry (Carol) Olah, Pat (Sean) McClure, Steve (Cathy) Olah; grandchildren, Jennifer Michalski, of Eugene Oregon, Becky (Kris)Kolibab of Rockville Maryland, Michael, Jane and Paul Olah, Kelly (Dan) DeVenney, Lindsay (Pete) Demray, Ross (Jennica) McClure; special great-grandchildren, Chelsea LaFlam, Alexander and Wyatt DeVenney, Jaymes Demray, Louie and Ella Olah, Austin, Allen, Kailey and Kris Kolibab; loving siblings, Dorothy Klein and Joe Olah. He was preceded in death by his infant daughter, his parents, and brothers Steve, John, and Jim and sisters, Helen Hubbard, Rose Barker, Irene Nero and Betty St. George. His family wishes to extend thanks to his special friend and neighbor Bernadette Pugh for all of her care and thoughtfulness throughout the years as well as Hospice of Northwest Ohio for their loving care. Friends are invited to visit on Thursday March 6, 2014 from 5:00-8:00pm, and Friday March 7, from 3:00-8:00pm in the Ansberg-West Funeral Home, 3000 Sylvania Ave. where the Rosary will be recited at 4:00pm on Friday. The Mass of the Resurrection will begin at 10:00am on Saturday at St. Catherine of Sienna Church. Interment will be in Resurrection Cemetery. Those wishing to make memorial contributions are asked to consider Hospice of Northwest Ohio, St. Stephen’s Church, or St. Catherine’s Church. To send his family online condolences, please visit www.ansberg-west.com.

Louie passed away peacefully surrounded by his family on March 4th, 2014 at the age of 96. He was born on February 1, 1918 to Steve and Rose (Forgacs) Olah as one of 10 children. He attended Birmingham School and Waite High School. He was an... View Obituary & Service Information

The family of Louis J. Olah created this Life Tributes page to make it easy to share your memories.

Louie passed away peacefully surrounded by his family on March...