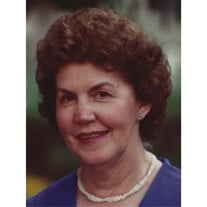 LUPPENS Louise Kauffmann Louise Kauffmann Luppens, 90, of Toledo, Ohio, passed away at home surrounded by her family on May 15, 2015. She was born at home to Emil & Frieda Kauffman of Swanton, Ohio. On November 24, 1945, she married the love of her life, Max F. Luppens. After the sudden death of Max, she enrolled at the University of Toledo at the age of 40, graduating magna cum laude with a bachelor of education. Louise was office manager for Trinity Episcopal Church in Toledo. Louise was an active member of Monroe Street United Methodist Church. She was an avid sports fan of OSU, UT Rockets and Duke. She participated in Fantasy Football and won the family 2015 NCAA March Madness bracket. Louise is survived by her children, James (Suzanne) of Colorado, Gary (Joan) of Maryland, Ann (Michael) Laney of Ohio, Sharon (Daniel) Harris of Ohio; grandchildren, Jonathan L., Daniel, David, Jennifer, Benjamin, Sarah, Jonathan H., Megan, Matthew, and 7 great grandchildren. Louise was preceded in death by her parents, husband, Max F. Luppens, brothers, Richard, Herman and Herbert Kauffmann, and sister, Margaret Haughey. On Saturday, May 30, 2015, friends may visit from 9:30 to 10:50 am, followed by the funeral service at 11:00 am, at Monroe Street United Methodist Church. Interment will follow at Toledo Memorial Park. In lieu of flowers, the family requests that contributions be made to the Monroe Street United Methodist Church Memorial Fund, 3613 Monroe Street, Toledo, Ohio, 43606. The family would also like to thank the Michigan Team from Hospice of Northwest Ohio for the wonderful care given to Louise and the support provided to the family every step of the journey. Arrangements entrusted to the Ansberg-West Funeral Directors, (419) 472-7633. Online condolences may be sent to the family at www.ansberg-west.com

LUPPENS Louise Kauffmann Louise Kauffmann Luppens, 90, of Toledo, Ohio, passed away at home surrounded by her family on May 15, 2015. She was born at home to Emil & Frieda Kauffman of Swanton, Ohio. On November 24, 1945, she married the... View Obituary & Service Information

The family of Louise (Kauffmann) Luppens created this Life Tributes page to make it easy to share your memories.