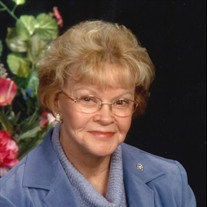 Louise Rockwell, 89, passed away peacefully on Monday May 14, 2018, at her home. She was born May 30, 1928, to Lillie Mae and Joseph Sexton. Louise spent many years in Marion, OH before moving to Toledo and attending Woodward High School. She met the love of her life, Grant Rockwell, and as she told it, “chased him til he caught me”. They enjoyed 45 wonderful years of marriage until his passing in 1995. After Grant’s passing, she enjoyed the companionship of lifelong friend, Jerry Benore. His wife and her best friend, Lois, had also passed. Together they traveled the world and had many fun adventures. Mom was always a busy person. Early in life she worked in the retail fashion industry, even doing some modeling. She “retired” to raise her family, but was always was the room mother, field trip driver and volunteered for anything and everything. Louise loved keeping busy and being around people. In the 70’s, she took up yoga, something she continued to practice into her older years. As her children grew older she felt the need to do something. So she went back to school, at the age of 50, to become an L.P.N., a vocation she truly loved and was so proud of. She retired in 1992, to spend more time with her family. She also volunteered at Christ the King Catholic Church, where she was a longtime member and St. Anne Mercy Hospital, volunteering in the gift shop. Louise is survived by her son, John (Sharon) Rockwell; daughter Ann (Bill McCallister) Varwig; grandchildren, Adrianne Varwig, Sarah (Mark) Sheets and Grant (Renae) Rockwell and 4 great-grandchildren. She is also survived by her brother, John (Barb) Sexton of San Diego, CA, sister-in-law, (whose was like a sister), Barbara Sexton of Reno, NV and Jerry Benore and his family. Louise was preceded in death by her brothers, Charles Sexton, Joseph “Ted” Sexton and sister, Peggy Sexton Rodau. Friends are invited to visit on Monday, from 3-8 p.m., at the Ansberg-West Funeral Home, 3000 Sylvania Avenue, (between Secor and Douglas Roads). Visitation will also be held on Tuesday, from 9 a.m. until the funeral mass at 10 a.m, at Christ the King Catholic Church, 4100 Harvest Lane. Interment will follow at Toledo Memorial Park. Memorial contributions may be made to Memory Lane Dementia Adult Day Care Services, (formerly Alzheimers Day Care), 2500 North Reynolds Road, Toledo, OH 43615 or Christ the King Catholic Church.

Louise Rockwell, 89, passed away peacefully on Monday May 14, 2018, at her home. She was born May 30, 1928, to Lillie Mae and Joseph Sexton. Louise spent many years in Marion, OH before moving to Toledo and attending Woodward High School. She... View Obituary & Service Information

The family of Louise Rockwell created this Life Tributes page to make it easy to share your memories.

Louise Rockwell, 89, passed away peacefully on Monday May 14,...