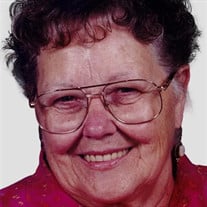 Lucille Mae Ovall, 100, celebrated her homecoming to be with the Lord on July 19, 2021 at Swan Creek Ohio Living; with several loving family members at her bedside. Lucille was born April 29, 1921 in Toledo, Ohio, as one of twelve siblings, to her parents, Adolf and Margaret Geoffrion. During the time of World War II, as a young business woman, Lucille was part-owner of “Lucy’s Sugar Bowl,” a prosperous candy store in Toledo, Ohio. Following the war, after a brief courtship and several love letters from Art while he was stationed overseas, Lucille and Art got married in December of 1946, and began their lives together to form a family that ultimately grew to 9 children, 28 grandchildren, and 46 great grandchildren. After the youngest were enrolled in school, Lucille became a part-time sewing instructor at State Hospital, Bureau of Vocational Rehabilitation; and years later managed a team in the Independent Living program in Cottage E, that selected, monitored, and assisted mental health candidates for moving into their own homes, often times inviting them to live in her home for brief periods to help in the transition. Her Godly faith was at the core of her being. She was an active member of St. Agnes Parish until her family moved to Little Flower Parish in 1970, where she became a dedicated and prominent member of the St. Vincent De Paul, LF outreach center and food pantry. Lucille cherished her family. In tough times and in times of celebration she would always be ready to offer a quiet ear for listening, or give wise counsel, or simply offer a kind shoulder to cry on; but more often than anything, she shared her boisterous laughter in the many joyful moments that filled her home. Lucille is deeply loved and her presence will truly be missed. Lucille is survived by her children, Ted (Debbie), Greg (Karen), Cindy Mussery (Den), Carl, Jeff (Debra), Mary Williams (Tom), Carolynn Ensey (Lee), Marilynn Cowell (Gary), 26 grandchildren and 46 great grandchildren. Lucille was preceded in death by her loving husband, Arthur Carl Ovall, her son, Mark Ovall, two of her 28 grandchildren, Cal and Chad Ovall, and her son-in-law Dennis. Lucille was the lone survivor of her 12 siblings. Mass of the Christian Burial will be celebrated 11:00a.m. Wednesday, July 28, 2021 at Little Flower Catholic Church, 5522 Dorr Street, Toledo, Ohio 43615, where friends are invited to visit after 10:00a.m. Interment will follow in Ottawa Hills Memorial Park.

Lucille Mae Ovall, 100, celebrated her homecoming to be with the Lord on July 19, 2021 at Swan Creek Ohio Living; with several loving family members at her bedside. Lucille was born April 29, 1921 in Toledo, Ohio, as one of twelve siblings,... View Obituary & Service Information

The family of Lucille Mae Ovall created this Life Tributes page to make it easy to share your memories.

Lucille Mae Ovall, 100, celebrated her homecoming to be with...