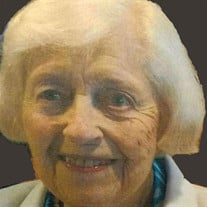 Marceil Savidge, age 94, went to be with her Lord and Savior on Friday September 28. One of 12 children, she was born August 4, 1924 in Lebanon, Indiana to Elmer and Velma DeBord. When the family moved to Toledo she attended Glenwood School and graduated from Scott High School in 1942. During her senior year, she began working as a bookkeeper for the France Stone Co. when many of the men in the accounting dept. went to war after Pearl Harbor. She continued to work there for 10 years. The DeBord family shared the good news of the gospel by ministering in churches, Youth for Christ rallies, rest homes to name a few. Marceil sang in a trio with her sisters, Martha and Barb. She married Jack F. Savidge on June 24, 1950 at the First United Presbyterian Church. They were not only united in marriage, but in their love and service of the Lord. Jack and Marceil were among the founding members of the Christian Fellowship Church on Monroe Street. Marceil played the piano or organ and Jack led the congregational singing. They sang duets together throughout their lives. Marceil taught Sunday School, held Good News Club in her home, and was a discussion leader for Women’s Bible Study Fellowship. She daily studied her bible and prayed for the salvation of her family, neighbors and the world. Jack and Marceil financially supported many ministries over the years. She was preceded in death by her son, Neal in 1997 and husband, Jack in 2002. She is survived by her only remaining sibling, Barb Horner; daughters, Pat (Dan) Perry, Andrea Savidge; sons, Todd (Chris) Savidge and Jack Savidge Jr.; 7 grandchildren and 4 great grandchildren. The family wishes to thank Dr. Peyton and the staff of Sunset House, where she resided the past year and a half. Thank you to St. Anne’s E.R. and I.C.U., Sunset Village and Ashanti Hospice for their compassionate care. Please join us to celebrate her life at a memorial service at 2:00 PM on Saturday, October 20 at Christian Fellowship Church, 6711 Pilliod Road, Holland, Ohio. Interment at Toledo Memorial Park will be private. In lieu of flowers, memorial contributions may be made to Christian Fellowship Church, which will be distributed to ministries Marceil supported. Arrangements entrusted to Ansberg-West Funeral Directors. Condolences for Marceil’s family may be expressed online at

Marceil Savidge, age 94, went to be with her Lord and Savior on Friday September 28. One of 12 children, she was born August 4, 1924 in Lebanon, Indiana to Elmer and Velma DeBord. When the family moved to Toledo she attended Glenwood School... View Obituary & Service Information

The family of Marceil (DeBord) Savidge created this Life Tributes page to make it easy to share your memories.

Marceil Savidge, age 94, went to be with her Lord and Savior...