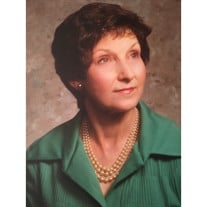 Margaret B. Clifford, 88, of Sylvania, passed away peacefully on June 16, 2016 at Hospice of Northwest Ohio. She was born on December 18, 1927 to Frank and Iva Barber in Archbold, Ohio. Margaret graduated from Flower Hospital School of Nursing in 1950. Her compassionate and gentle spirit led her successful nursing career which included positions in surgery, occupational health and the American Red Cross. Following her retirement, she worked at Macy’s in Toledo, where she practically donated her paycheck back for her impeccable and expansive wardrobe. Margaret married John Clifford on October 4, 1952 and together, they raised two children, Michael and Susan. She was the heart of her family and her greatest joy was time spent with them celebrating everything from simple occasions to major achievements. “And though she be but little she is fierce” is a quote that fits her well as she was extremely independent and led a very active life filled with friends and activities until her diagnosis two months ago. She did things her own way and on her own time. Margaret had a passion for genealogy, collecting antiques and fashion. She touched countless lives, often with a simple and thoughtful gesture when it was needed most. She was loved by many and will always be remembered for her generosity and kindness, never failing to put others first. Left to cherish her life fully lived are her daughter Susan (Tom) Deckelman and her grandchildren Allison (Mark) Murawski, Jeffrey and Andrew Deckelman, and daughter-in-law Mary Clifford of Philadelphia. She was eagerly anticipating the arrival of her first great grandchild in August. She was preceded in death by her parents, husband and son. The family will receive friends on Monday, June 20 from 3-8 p.m. at Ansberg-West Funeral Home, 3000 W. Sylvania Ave. A mass of resurrection will be celebrated on Tuesday, June 21 at 1:00 p.m. at St. Joseph Church, Sylvania. Interment following at Toledo Memorial Park. In lieu of flowers, the family suggests contributions be directed to Lourdes University College of Nursing or the National Park Service. Margaret’s family would like to thank the nurses and staff at Hospice of Northwest Ohio for their support, care and compassion. To send Margaret’s family online condolences, please visit www.ansberg-west.com.

Margaret B. Clifford, 88, of Sylvania, passed away peacefully on June 16, 2016 at Hospice of Northwest Ohio. She was born on December 18, 1927 to Frank and Iva Barber in Archbold, Ohio. Margaret graduated from Flower Hospital School of Nursing... View Obituary & Service Information

The family of Margaret B. Clifford created this Life Tributes page to make it easy to share your memories.

Margaret B. Clifford, 88, of Sylvania, passed away peacefully...