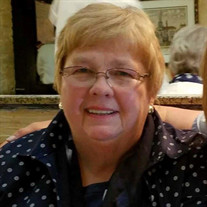 The world lost a true humanitarian Sunday, December 20, 2020. After a year-long battle with multiple strokes and complications, Margaret Ann Wiles McCready, 79, joined her husband Jerry, and son Terry, in Heaven. Margaret Ann was born in Beckley, West Virginia on May 24, 1941 to Margaret Corker Wiles and Thomas Edward Wiles Sr. She was the first grandchild for Bernard T. and Flossie Corker and therefore the light in everyone eyes. Margaret Ann attended Good Shepherd School and Church and went on to St. Ursula Academy where she played the viola in the orchestra and made lifelong friendships. In 1963, Margaret graduated from Mary Manse College with a BA in education and a minor in French. Margaret Ann played college basketball and coached at Good Shepherd Church where she met Jerry. She and Jerry had three children: Tammy, Tim, and Terry. As a teacher for 42 years, Margaret taught elementary (K-8) in a various schools of the Toledo Diocese and Toledo Public Schools, including St. Charles, Birmingham, McKinley, Nathan Hale, Bancroft Hills, and Old Orchard, just to name a few. She also was involved in many progressive programs in education such as mentoring new teachers in hands-on science and math with the UT Tapestries program, as well as with the Michigan State University project called Connected Math, which was later published. Margaret loved learning and chose to constantly immerse herself in books, classes, lectures to deepen and widen her understanding of anything that interested her. One of those things was the teachings of the Catholic Church. In the early 1980s, she opened up her home to facilitate sharing and a renewal of faith through the RENEW program of the Catholic Church. For many years and up until her stroke, Margaret dedicated much of her life to preparing anyone interested in becoming a Catholic through the RCIA program at Gesu Catholic Church. She worked tirelessly on learning, planning, educating, sponsoring, and loving the newest members of the Catholic Church. Margaret wrote all of the petitions for Masses at Gesu. She planned and decorated the Church. She planned countless Masses including the most beautiful funeral Masses. She organized and worked the bereavement luncheons. Her children’s friends often referred to her as “The Church Lady” while growing up. As Pastor Father Marty said, “Margaret was the heart and soul of Gesu.” Margaret Ann was loved by everyone. To adapt a quote from Dr. Seuss, “Her heart was two sizes too large.” Margaret was preceded in death by her son, Terry McCready, her husband, Jerry, her parents, Thomas and Margaret Corker Wiles, her brother George Wiles, and her cousin Bernie Corker (who preceded her by just a month). She will be dearly missed by her daughter, Tammy Arndt, her son Tim McCready, her brother Tom (Genie), her cousin/ friend, Gretchen Corker, and her grandchildren: TJ McCready, Andie McCready, Mac Arndt, Teagan McCready, Lucas Arndt, Max McCready, Brady McCready and Joey McCready, many nieces and nephews, as well as incredible friends Mary Lou Snyder, Sandy Harding, Karen Billmaier, Barb Dvorak, Ann Zirker and many, many more! Please know she loved each and every one of you so very much. A Mass of Christian Burial will take place at Gesu Catholic Church 2049 Parkside Blvd., Toledo, Ohio 43607, at 2:00pm on Monday, December 28, 2020. Donations can be made to one of Margaret’s dearest places Gesu Catholic Church or St. Ursula Academy. *Unfortunately, we have to ask that all Covid-19 safety precautions be adhered to, including wearing a mask and social distancing.

The family of Margaret Ann Wiles Mccready created this Life Tributes page to make it easy to share your memories.