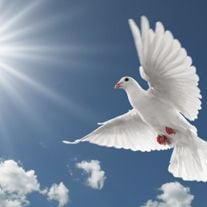 Margaret "Peg" Bickford was welcomed by her Savior into her heavenly home June 17, 2021. She was born September 19, 1930 to parents Grace (Hughes) and Clarence Kuhl. Raised in Toledo, Ohio, she was graduated from Scott High School class of 1948. Introduced through mutual friends, she met and later married Donald W. Bickford in May 1954. They established their home in Point Place until 2004 when they moved to South Toledo. Most recently, Peg resided at Genesis Village for 2 years where she enjoyed making new friends and participating in group activities. Together Don & Peg built a life of loving and serving others through generous gifts of time, energy, and resources to individuals, families, the Christian Fellowship Church, and throughout the community. Peg could always be found lending a hand with the Pioneer Girls program, dinners and special church events, and worked in the church infant nursery for more than 25 years. Peg was employed as a secretary at several local businesses and after retirement worked at Wendy's and Tim Horton's. Peg and Don were dedicated supporters of University of Toledo Rockets men and women's basketball programs holding season tickets for more than 50 years. They rarely missed a game, also often attending out of town games. They counted the teams, coaching staff, and other dedicated fans among their closest friends. Peg is predeceased by her parents, husband, Donald (2011), brothers Robert and Terry, and sister Violet. She is survived by sister-in-law, Sue Kuhl, numerous nieces and nephews, and countless dear friends of all ages whom she considered family. She will be greatly missed by all who knew her. Per her request, a memorial service is scheduled for Friday, August 6, 2021 7:00 pm at Christian Fellowship Church, 6711 Pilliod Road, Holland, Ohio 43528. Professional arrangements were entrusted to the Ansberg-West Funeral Directors, 419-472-7633. Memorial contributions may be made to the church. Condolences may be expressed online at www.ansberg-west.com.

Margaret "Peg" Bickford was welcomed by her Savior into her heavenly home June 17, 2021. She was born September 19, 1930 to parents Grace (Hughes) and Clarence Kuhl. Raised in Toledo, Ohio, she was graduated from Scott High School class of 1948.... View Obituary & Service Information

The family of Margaret "Peg" Bickford created this Life Tributes page to make it easy to share your memories.

Margaret &quot;Peg&quot; Bickford was welcomed by her Savior into her heavenly...