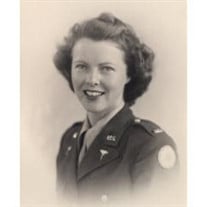 BUNDO Marie C. Marie C. Bundo , 94, of Toledo, Ohio, died peacefully at Hospice of Northwest Ohio on November 10, 2014. She was born to Ina (Laffoon) and William Collins on April 22, 1920, in Deming, New Mexico. Marie spent her childhood in Missouri where she graduated from Harrisonville High School in 1938. She completed her RN degree at Saint Joseph Hospital School of Nursing in Kansa City, Missouri, on May 25, 1941. She spent several years working as a flight attendant for TWA and was featured in some of the company’s advertising. During World War ll Marie joined the army as a first lieutenant working in the 111th Evacuation Hospital. She was stationed in Northern France and Central Europe where she cared for many young soldiers close to the battle lines. This experience stayed with her as she often worried about the many “young boys” sent off to other wars. In 1957, Marie attended Harris Hospital School of Anesthesia in Fort Worth, Texas. She worked as a nurse anesthetist in several hospitals in the South before moving her family to Toledo in 1966. St. Vincent Mercy Medical Center became Marie’s second home until her retirement in 1985. She was admired by the surgical staff and students who worked with her, and many benefited from her support and wisdom. In her retirement years, Marie loved the time spent with her family and enjoyed the challenge of a good crossword puzzle and a friendly game of bridge. All who met her were touched by her gentle, compassionate nature and warm sense of humor. She is survived by her children, Martha (Thomas) Ryan; Michael (Patricia) Evans; Gregory ( Patricia) Evans ; Ann ( Norman) Wasson, and daughter-in–law, Micki Evans. She will be missed by all, including fourteen grandchildren and eleven great-grandchildren. She was preceded in death by her husband, Charles Bundo, her two sons, Timothy and Derek Evans, her sister, Lee Heinrichs, and brother, William Collins. Friends may call from 12 -4 on Sunday, December 7, 2014 at Ansberg-West Funeral Home, 3000 Sylvania Ave.,Toledo. A celebration of life service will begin at 4PM in the funeral home. In lieu of flowers, expressions of sympathy can be made to Hospice of Northwest Ohio, 30000 East River Road, Perrysburg, Ohio 43551 or the Toledo Animal Shelter , 640 Wyman Street, Toledo, Ohio 43609. Online condolences may be sent to the family at www.ansberg-west.com

The family of Marie C. Bundo created this Life Tributes page to make it easy to share your memories.