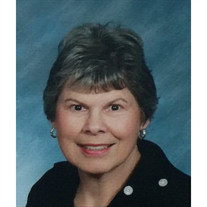 Marie (Durell) Ketteman Marie (Durell) Ketteman passed away on June 24, 2017 at Hospice of NWO following a lengthy battle with Lewy body Dementia. She was born September 6, 1937 to Robert F. and Nellie Marie (Hughlett) Durell. Marie graduated in 1955 from DeVilbiss High School where she was a majorette in the marching band and later was employed by the Boy Scouts of America in both Toledo and Ann Arbor, Michigan. Marie met her husband of 59 years, Richard Ketteman at DeVilbiss and they married in 1958. They lived in Streator, Illinois for several years before returning to Toledo in 1974. Marie volunteered at Toledo Hospital for over 35 years, having been involved in many activities. She was a past president of the Toledo Hospital Auxiliary and member of the Auxiliary board. Marie also volunteered in the neo-natal unit, caring for premature infants. She was active in many fundraisers for the hospital including “The Event”, Children’s Hospital playground equipment and chairman of the Annual Poinsettia Sale. Marie volunteered for both the Toledo chapter of American Red Cross blood drives and the Jamie Farr LPGA golf tournament for several years and she was also a member of P.E.O. Sisterhood and Epworth United Methodist Church. But her most satisfying role was mother of three and devoted caregiver to her special needs daughter. Marie greatly enjoyed cooking, reading, gardening, traveling and spending quality time and welcoming family and friends at their summer home at Evans Lake in Michigan’s Irish Hills. Marie was preceded in death by her parents, daughter Lisa and brother Frank Durell. She is survived by her husband and children, Karen (George Webb) Mitchell of Toledo and Tom (Kim) Ketteman of Woodbury, Minnesota. Grandchildren include Zachary (Alison) Mitchell, Alex (Lauren) Mitchell and Douglas (Keyanna) Mitchell, all of Alabama and Brianne (Spencer) Hartberg, Shane (Veronique) Ketteman and Connor Ketteman, all of Minnesota. Great-grandchildren include, Nora, Caroline, Lilah and Bennett Mitchell. They were a source of great pride and held a special place in her heart. Also surviving are brother Robert (Jackie) Durell of Toledo, sister-in-law Sue (John) Cross of Mooresville, N.C. along with nieces and nephews. We want to thank the medical staff and caregivers for both in-home and in-patient service at Hospice of NWO for their outstanding and compassionate attention. Visitation will be held from 2:00 to 8:00pm on Wednesday, June 28 at Ansberg-West funeral home, 3000 Sylvania, Ave. 43613 where memorial services will begin at 11:00 am on Thursday. Burial will be private. Memorials may be directed to Hospice of NWO, 30000 East River Rd., Perrysburg, Ohio 43551 or Toledo Hospital Auxiliary, 2121 Hughes Dr., Education Center, Toledo, OH 43606. To send her family online condolences, please visit www.ansberg-west.com.

The family of Marie Ketteman created this Life Tributes page to make it easy to share your memories.