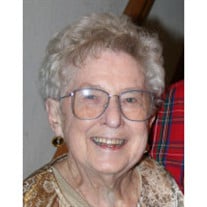 Marie Therese "Tee" Mackin Reynolds passed away on Saturday, April 21 at St. Anne's Hospital in Toledo. She was 84. Therese was born in Toledo on November 10, 1927 to Marie (Dugan) and Hugh Patrick Mackin, the oldest of three children. She grew up in the Old West End and in West Toledo. Her devotion to family was rooted early in her life as she shared her home with her grandmother and Aunt Kate Dugan as well as her immediate family. Therese recalled her mother's wonderful cooking and the clothes she sewed for her children during the Depression. As a student at Blessed Sacrament School, she loved math and writing classes. She spent summers at nearby Close Park playing tennis and watching movies at the shelter house. Therese was a member of the class of 1945 at Notre Dame Academy, where she was a dedicated student and where she met some of her closest lifelong friends. She graduated from Mary Manse College in 1949, and, with several friends, formed a unique sorority, The 49ers, who continue to meet regularly for lunch and birthday celebrations. Therese met Paul A. "Pug" Reynolds on a blind date for a Mary Manse dance, and she always said it was "love at first sight." A three-year romance followed, and Tee and Pug were married on October 20, 1951. Through the 52 years of their marriage, until his death in 2004, they enjoyed traveling, golf outings, and playing cards with their friends (Pug called their group The Mystic Knights of the Sea, Tee and the wives calledthemselves The Ladies Auxiliary). Therese was a long-time 5th grade teacher at Blessed Sacrament School, where she taught her three youngest children and team-taught with her oldest daughter for one year. After her retirement from teaching, she worked for 10 years at the corporate offices of Food Town Supermarkets. She and Pug enjoyed winters in Florida, where they shared theme parties and good food with new friends from all over the country. After Pug died, she led a family trip to Ireland, shepherding four of her children, a daughter-in-law, a son-in-law, and five grandchildren to the ruins of her grandmother's home in County Roscommon and to the home of her father's relatives in northern Ireland. Therese had a life filled with family, faith, friends, food,and five children, who gave her and Pug 10 grandchildren and two great grandchildren. She was preceded in death by her husband Paul A. (Pug) Reynolds, daughter Susan J. Reynolds, and brothers Thomas Mackin of Columbus, OH, and Terrence Mackin of Sandy, UT, and sister-in-law Sara Mackin. She is survived by her daughters Christine (“Doc”) Holliday and Mary Lynn Reynolds (Dan Duris) of Toledo OH, and her sons Paul Joseph Reynolds (Mary Anne Conklin) of Sylvania, OH and Mark (Pam) Reynolds of East Lansing, MI. Ten grandchildren mourn her loss: Katie (David Holloway), Graham, Libby, and Neil Duris, Laura and Anji Reynolds, Ben (Sabrina) Holliday and Nelson Holliday, Hayley Marie and Paul Eamonn Reynolds, and two great-grandchildren, Benjamin Holliday, Jr. and Oliver Holloway. Her sister-in-law MaryMackin of Sandy UT survives here, as do several cousins and nieces and nephews. The family will receive guests at Ansberg-West Funeral Home, 3000 W. Sylvania Avenue, Thursday from 2-8 p.m., with an open tribute at 7:30 p.m. The Mass of the Resurrection will be celebrated at 10:00 a.m. at Blessed Sacrament Church, Bellevue Road and Castlewood Drive, burial at Calvary Cemetery. In lieu of flowers, friends are asked to consider donations to the Blessed Sacrament Building Fund.

Marie Therese "Tee" Mackin Reynolds passed away on Saturday, April 21 at St. Anne's Hospital in Toledo. She was 84. Therese was born in Toledo on November 10, 1927 to Marie (Dugan) and Hugh Patrick Mackin, the oldest of three children. She grew... View Obituary & Service Information

The family of Marie Therese Reynolds created this Life Tributes page to make it easy to share your memories.