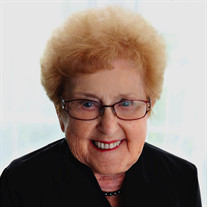 Marilyn Carroll Bennett (nee Marilyn Carroll Kratt) left this world for her eternal home on Thursday February 25, 2021, at 94 years of age. Marilyn lived a life full of love, grace, leadership and genuine caring for those around her. She was a woman of immense faith throughout her life and until she was returned to her Lord. She was born on November 28, 1926 in Toledo, Ohio to Clarence and Virginia Kratt. Marilyn grew up in Toledo graduating from Scott High School in 1944. She was the first of her family to attend college and received her Bachelor of Arts with honors in 1948 from the University of Toledo. There she met her future husband Milton Walker Bennett Jr. on a blind date. On March 21, 1948 she and Milton were married at the First Baptist Church of Greater Toledo. They shared 62 wonderful years of marriage, full of joys, challenges, and adventures. She was unfailing in her support of Milt’s business endeavors and in their shared passion for their church, community service and charity work. Throughout their lives they travelled extensively around the world seeing all seven continents together. Milt and Marilyn also loved to take their entire family on trips where everyone could be together and experience new things as a close-knit group. Marilyn was a member of First Baptist Church of Greater Toledo for 83 years. She was a leader within the church including serving as its Executive council president. She was a 50-year member of P.E.O. International and held several offices in her local chapter. Marilyn was also an active member in the Masonic community. She was a Life member of Palestine Chapter #51, O.E.S. and served as Worthy Matron for the chapter several times. She also served as Worthy Grand Matron for the State of Ohio in 1992. This was a cherished experience in Marilyn’s life and she continued to host her “Smooth Sailors Grand Family” for annual reunions up until 2019. She was dedicated to her O.E.S. family and friends always staying in touch, and sending cards to let them know they were in her thoughts and prayers. Marilyn was “sharp as a tack” and couldn’t help but stay busy and active. She was very “with the times” and stayed on top of technology including being a Facebook member, emailing friends on her Mac, and wearing an iWatch. She was an avid sports fan watching every game she could especially the Tigers and the University of Michigan…Go Blue! She was happy to talk sports with anyone especially her grandsons. Though she was the only child of an only child, she became the mother of four children, grandmother to eleven, and a great-grandmother to fourteen. She once said, “it is a little bit overwhelming at times,” but she lived her life surrounded by family and love. Marilyn was preceded in death by her husband Milton Bennett and son Gary Bennett. She is survived by her son, David and his wife Gwen of Toledo, OH; daughter, Carol and her husband David Clarke of Toledo, OH; and daughter Susan and her husband Michael Dunlap of Denver, NC. She is also survived by 11 grandchildren: Robert (Kerri) Bennett, Allison Bennett, Stephanie Bennett, Melissa (Benjamin) Beckett, Elizabeth (David) Zaenger, Lauren (Matthew) Hadeed, Richard (Christine) Dunlap, Thomas (Ashby) Dunlap, Courtney (Mike) Brauer, Amanda (Justin) Schafer, Daniel (Johanna) Bennett. Marilyn once said “God has been very good to me, He has given me a wonderful family, great friends, great health for the most of my life and so much more!” The family will be holding a private service and burial and are making plans for a larger celebration of her life in the future. In lieu of flowers, the family requests donations be made to the First Baptist Church of Greater Toledo, YMCA’s Camp Storer, or the Ohio Eastern Star Home.

Marilyn Carroll Bennett (nee Marilyn Carroll Kratt) left this world for her eternal home on Thursday February 25, 2021, at 94 years of age. Marilyn lived a life full of love, grace, leadership and genuine caring for those around her. She was... View Obituary & Service Information

The family of Marilyn Carroll Bennett created this Life Tributes page to make it easy to share your memories.