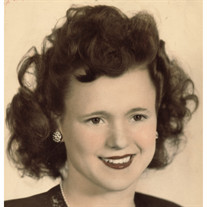 Marilyn Rose (LaPoint) Marshall, passed away on March 18 at Heartland of Waterville. Marilyn was born on August 28, 1925 in Toledo to Francis and Petronella “Nellie” Moore. Marilyn’s mother Nellie died when she was 7 months old in March, 1926. Marilyn had 9 natural brothers and sisters, Raymond, Kenneth, Mildred, Clarence, Carlton, Miriam, Helen, Rita and Francis. After her mother died, Marilyn was raised in a loving and caring catholic home by her sister, Mildred and her husband, Rudolph LaPoint and was considered a sibling by their children. Marilyn was given much love and gave much love to her second family. May they forever be blessed for being an important part of her turning out to be a loving and caring woman. Marilyn graduated in 1944 from Whitmer High School and was married on January 3, 1946. Her beloved husband, George was a Navy veteran who served for 5 years on the Destroyer USS Madison and one year in Adak, Alaska during World War II. George preceded her in death after 55 years of marriage on May 7, 2001. Marilyn had 1 child, son Michael, born August 11, 1947 and she also had a God son, Craig Winkleman who she also cared very much for. Marilyn’s last employment was at Mutual Federal Credit Union as a loan officer and head teller until her retirement in 1991. She also had past employment at Toledo Edison, Ward Bond Builders, Haas-Jordan and Montgomery Ward. Marilyn enjoyed spending time with family and friends. She was an active member of Our Lady of Mount Carmel Church in Temperance, Michigan. Marilyn was preceded in death by her natural brothers and sisters and her loving and caring brothers, Paul, Rudy, Pete and Jean LaPoint and sisters, Leanne Campbell and Betty Foor. Surviving is her son, Michael (Julie) Marshall; grandchildren, Jayme (Bob) Eberlin, Michelle Dobrosky; great grandchildren, Brandi (Justin) Smith, Michael (Mallory) Dobrosky, Britni, Brenna and Riley Eberlin; great great granddaughters, Alexandria and Delilah Smith; sisters, Alma (Sister Rebecca LaPoint, OSF), Noreen (Jim) Greathouse, Nita (Gerry) Randolph, Rosie Wolf; brothers, Karl (Kathy), Jan (Barbara) and Bernie (Donna). A special thank you to the caregiving staff at Heartland of Waterville for their special care for Marilyn, especially her nurses, Dawn and Wendy. Marilyn will be shown at Our Lady of Mount Carmel, 8330 Lewis Avenue, Temperance, Michigan on Thursday March 23. Family and friends may visit after 9:30am, Mass of the Resurrection will be celebratedat 11:00am and a luncheon will follow. Marilyn will be cremated and her remains interred with her husband, George in the Lazarus section of Our Lady of Mount Carmel Cemetery at a later date. Memorial contributions may be given to Our Lady of Mount Carmel. Arrangements entrusted to Ansberg-West Funeral Directors. Condolences for Marilyn’s family may be expressed online at www.ansberg-west.com

Marilyn Rose (LaPoint) Marshall, passed away on March 18 at Heartland of Waterville. Marilyn was born on August 28, 1925 in Toledo to Francis and Petronella &#8220;Nellie&#8221; Moore. Marilyn&#8217;s mother Nellie died when she was 7 months... View Obituary & Service Information

The family of Marilyn Rose Marshall created this Life Tributes page to make it easy to share your memories.

Marilyn Rose (LaPoint) Marshall, passed away on March 18 at Heartland...