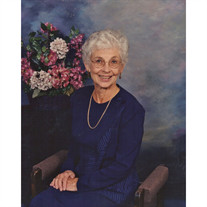 Marilyn Lois Shuptrine, age 84, passed away peacefully on Tuesday, April 1, 2014. Born in Detroit, Michigan on July 10, 1929 to Norma (Woelke) Bentley and Julian J. Bentley, she graduated from Redford High School in Detroit and received a bachelor's degree in Business Administration from Wayne State University. She married Calvert H. Shuptrine in 1951 and they settled in Toledo in 1954. They have 3 children; Karen Hughes, John Shuptrine (Kelly), and Julie Shuptrine (Bernard Wilburn). Marilyn had several passions and talents. She was a gifted singer, with a high, coloratura voice that pleased Toledo audiences for over 40 years. She was a soloist in church choirs all her life, including at Epworth United Methodist Church, as well as soloist with the Toledo Symphony Chorale and the Toledo Symphony. She was a member of the music groups the Euterpean and Monday Musicale. Marilyn, along with a small cadre of talented women, was a dedicated synchronized swimmer with the West Toledo Y.M.C.A. for over 40 years. She taught swimming to babies and toddlers, as well as to mentally and physically challenged children through the Washington Local School system for 30 years. She loved to sew, cook and garden. She loved her family dearly, and is survived by her husband, children, five grandchildren, Kelly Spears, Chris and Casey Shuptrine, Miles and Lake Wilburn and 2 great-granddaughters, Isabella and Alexandra Spears. She was preceded in death by her mother, father and sister, Barbara (Fred) Butler. Friends are invited to visit on Saturday, April 12, 2014, from 12 noon until the memorial service at 1 p.m., in the Ansberg-West Funeral Home, 3000 Sylvania Avenue, (between Secor and Douglas Roads). In lieu of flowers, please consider donating to the American Humane Society, 1400 16th Street NW, Suite 360, Washington, DC, 2003.

The family of Marilyn Lois Shuptine created this Life Tributes page to make it easy to share your memories.