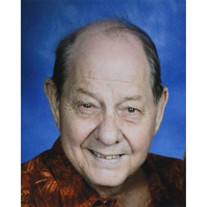 Obituary – December 2016 Marion E. (Bud) Liming, age 81, unexpectedly passed away on December 13, 2016 in Tampa, FL. One of nine children to Virgil and Lillian Liming, he was born in Georgetown, OH on March 7, 1935. He was predeceased by his wife of 57 years, E. Louise Liming, in November of 2014, his daughter Linda L. Turk (Liming), and her husband Kenneth R. Turk of Swanton, OH. Bud is survived by his wife, Nancy Hite-Liming, who he married in September 2015, and his twin sister Mary Leonard of Maineville, OH, and his sons David (Patricia) E. Liming of Swanton, OH, and Kenneth (Kristeen) B. Liming of Silver Spring, MD, along with seven grandchildren: Nicole (Derrick) Grohe, Maria Liming, Aubrey Liming, Leilani (Stewart) Graf, Zachary Turk, Samantha Liming, and Kurt Liming, as well as three great grandchildren: London, Braedan, and Ford. Also by his step-family, Beth (William) Watercutter of Columbus, OH, Jeff Hite, Greg Hite of Sylvania, OH, five grandchildren, and one great-grandchild. Bud was employed by the American Tobacco Company for over 35 years. He was transferred to Toledo, OH in 1962. This allowed him to ascend to the position of Section Sales Manager. Retiring in 1992, he focused on spending time with his family, traveling and gardening. He also served on several communities and took part in many social activities through his church Aldersgate United Methodist, where he was an active member for over 50 years. Family and friends will be received on Wednesday, December 21, from 4:00 p.m. to 8:00 p.m. at Ansberg-West Funeral Home (3000 Sylvania Ave., Toledo, OH). In addition, family and friends may visit at Aldersgate United Methodist Church, Toledo, OH on Thursday from 10:00 a.m. to 10:45 a.m. Funeral service will begin at 11:00 a.m. at Aldersgate United Methodist Church (4030 Douglas Ave, Toledo, OH) followed by interment at Toledo Memorial Park (6382 Monroe St., Sylvania, OH). In lieu of flowers, donations may be made to Aldersgate United Methodist Church, attn: Church Van Maintenance Fund, or a charity of your choice.

The family of Marion "Bud" Liming created this Life Tributes page to make it easy to share your memories.