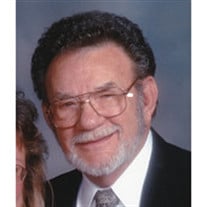 Marion R. Parsons, 84, of Toledo, passed away Sunday, November 20, 2016, at Ebeid Hospice. He was born April 9, 1932, in Van Wert, OH and was the son of Francis and Loris Parsons. Marion served honorably in the Army during the Korean War (May 17, 1949 – August 19, 1952, 3 years, 3months and 3 days). He was awarded a Purple Heart with 4 bronze oakleaf clusters, Good Conduct Medal, National Defense Medal, Korean Service/Silver Star and Bronze Star, United Nations Ribbon and Infantryman Patch. Marion was a member of Paragon Masonic Lodge #788, 32 degree Scottish Rite and a life member of VFW Post #2898. He worked for Varta Industries (Barrett Batteries), for 30 years and various odd jobs before and some after. (Jack of all trades and master of them too.) Following retirement he was active helping to care for Uncle Paul, grandchildren, nieces, nephews, and the assorted children of friends and neighbors. He was “Uncle Marion”, “Papaw” and “Poppa” to them all. You would never know he would teach the kids or have them doing. There was nothing he wouldn’t do for any of them. He was a very active member of St. Paul United Methodist Church and the Friendly Center. He loved fishing, hunting, camping, traveling, working in his woodshop and his special friend Ebony. He could fix or make just about anything, just ask. He would tell you something/anything and you would never know if he was telling the truth or pulling your leg, until you saw the sparkle in his eyes or the grin on his face. Survivors include his wife of 54 years, Peggy (Burton) Parsons, whom he married on March 10, 1962; children, Nick (Connie) Parsons, Anthony “Tony” (Lisa) Parsons, Valerie (Gil) Jesse, Shelly (Fred) Rose; grandchildren, Jeremy (Diane) Parsons, Kim (Paul) Kurtz, Kristina (Jeff) Scheidegger, Joshua (Alisha) Staley, Jessica (Tracci) King, Ashley Parsons (Dan), Lyndon Parsons, and 7 great-grandchildren. Marion was the oldest of 13 children and is survived by 3 brothers and 2 sisters. Marion will be missed by all who crossed his path. We Love You! Friends are invited to visit on Friday from 5-7 p.m., in the Ansberg-West Funeral Home, 3000 Sylvania Avenue, (between Secor and Douglas Roads), where Masonic Services will follow at 7 p.m.. Funeral services will be held on Saturday at 10 a.m. from the funeral home. Interment will follow in Ottawa Hills Memorial Park with Lambertville VFW Post #9656 conducting military honors. Memorial contributions may be made to St. Paul United Methodist Church, 1201 Madison Avenue, Toledo, OH, 43604. Online condolences may be made to the family at ansberg-west.com

Marion R. Parsons, 84, of Toledo, passed away Sunday, November 20, 2016, at Ebeid Hospice. He was born April 9, 1932, in Van Wert, OH and was the son of Francis and Loris Parsons. Marion served honorably in the Army during the Korean War (May... View Obituary & Service Information

The family of Marion R. Parsons created this Life Tributes page to make it easy to share your memories.