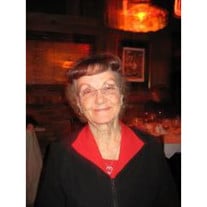 Marjorie Gail Hart was born October 28, 1925 to Ulysses Frederick Hart and Maggie Hutchins Hart just outside Shawnee, Oklahoma. She was the eighth of eleven children born to that couple. She graduated from Bethel High School in 1943. Marjorie married Zacharias T. Coffin in 1942, and they had two sons, Larry, now residing in Chiang Rai, Thailand, and Steven, of Naples, Florida. They moved to Toledo in 1959, where they raised their family. In 1964 she went to work for Toledo Business Machines as a bookkeeper, and was employed there until 1982. Zach passed away in 1992, and Marjorie continued to live on Edgevale Road in Ottawa Hills. She was an avid gardener, and was especially proud of her iris, dahlias, among hundreds of other varieties. She was a long time member of Faith Baptist Church, then Calvary United Methodist, and for the last twenty years a member of Emmanuel Baptist Church. The church, and the many friends she made there, were a significant part of her life. She is survived by her son Larry, his wife Prarthana, and his sons Bradley, Zach and Ulysses; her son Steven, his wife Patti, his daughter Aimee, and her husband Dean. Marjorie has three great grandchildren; Dominic, Alexia, and Evangelina. and 2 over forty nieces, nephews and their families. The last five years she resided at Sunset House, where she was well taken care of by the kind and effective staff. Friends are invited to visit from 4 to 8 pm, Tuesday, October 20th, at the Ansberg-West Funeral Home, 3000 Sylvania Avenue, (between Secor and Douglas Roads), where a brief prayer service will follow the visitation. Any donations, in her honor, can be made to Emmanuel Baptist Church. Burial arrangements will be at Resthaven Memorial Park, Shawnee, Oklahoma. "Whatever thy hands findeth to do, do it with thy might." "I shall pass through this world but once. Any good that I can do, or kindness that I can show, any human being, let me do it now, and not defer it. For I shall not pass this way again." These were words that our Mother lived by. And her life was long and fruitful. Online condolences may be made to the family at www.ansberg-west.com

Marjorie Gail Hart was born October 28, 1925 to Ulysses Frederick Hart and Maggie Hutchins Hart just outside Shawnee, Oklahoma. She was the eighth of eleven children born to that couple. She graduated from Bethel High School in 1943. Marjorie... View Obituary & Service Information

The family of Marjorie Gail Coffin created this Life Tributes page to make it easy to share your memories.