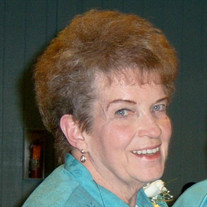 Martha Anne Garbers (Helber), age 85, passed away December 27, 2020 at Ebeid Hospice after losing her battle with severe pancreatitis. Martha was born December 20, 1935 in Toledo to Samuel George Helber and Frances Ida Helber. She graduated from Waite High School in 1954. She met the love of her life, Diedrich “Dick” Garbers, in July 1955 shortly after he arrived from Schneverdingen, Germany when Martha’s brother, Bob, introduced the two. They married on May 4, 1956 at East Christian Church and shared over 60 wonderful years together and raised 5 children. They additionally hosted two exchange students, Akemi Matsushita from Toyko and Cordula Florian from Berlin. Martha received her LPN and then earned her RN from Owens Tech. She worked 23 years at Toledo Hospital on the Neurology unit before retiring in 1996. She was a Girl Scout Leader for her daughters and was very active in the CoEd Class at Hampton Park Christian Church, where she was a member for 65 years. Because of her pride in her German heritage, Martha was an active member of GBU for over 60 years, the Toledo Swiss, and member of the Bavarian Sports Club (BSC) for over 50 years. She served as auditor for GBU District 510, Ticket Committee Co-Chairman for the GAF fest, and GAF Clubhouse Manager for 10 years with her beloved Diedrich. She relished going to many Gaufests and watching her kids (including 4 grandkids) dance with the Bavarian Sports Club D’ Holzhacker Buam Schuhplattler Gruppe. For many years, she even sewed the dirndls for the Schuhplattler Gruppe. In her later life, she helped cook meals at the GAF Jugendwoche Youth Day Camp for over 15 yrs. In her free time, Martha was known for her German cooking, baking, needlepoint, cross stitch, crochet, knitting and sewing skills. Martha also cherished travelling around the world with her husband, especially journeying to Germany to visit family and sailing in over 25 cruises. She enjoyed bowling in her youth and mall walking later in life. She loved watching Indy car and NASCAR racing. After suffering a stroke in 2017 which resulted in aphasia, Martha benefited from spending time with her DaZy Aphasia Support Group friends at UT. She was preceded in death by her loving husband, Diedrich “Dick”, her parents, Nan and Pop, her brother Robert Helber, sister Georgia Helber, and great-granddaughter Cassie Mae. Left to cherish her memory are her brother Jim (Tina) Valentine, her children Linda (Jim) Rice, Diane (John) Miller, Cheryl (John) Peters, Diedrich (Diane) Garbers Jr, and Susan (Chris) Heidenescher; grandchildren Jimmy (Amber) Rice, Kelly Rice (Bodie), Daniel (Lori) Staifer, Derek (Christina) Staifer, Desiree Staifer (Mike) Treadway, Justin (Jade) Peters, Chad Peters (Emily) , Joe Heidenescher (Emerson), Alan Heidenescher (Brittney), and Tori Skorich, great-grandchildren Will and Evan Staifer, Ian and Norah Staifer and Sophia Treadway, and several nieces and nephews. Visitation will be held from 3-7 p.m. on Friday, January 8 at Ansberg-West Funeral Home, 3000 Sylvania Ave. Visitation at 10 a.m. with funeral services beginning in the funeral home at 11 a.m. on Saturday, January 9. Interment will follow in Ottawa Hills Cemetery. The family suggests donations be made to the GAF Summer Camp, Bavarian Sports Club or Hampton Park Christian Church. The family wishes to extend a special thank you to the Ohioans Home Healthcare, the Staff at Ebeid Hospice and Mary Keyes for the special care each gave to Martha during these difficult times. Prost to a great mom and Oma. Du bleibst immer in unseren Herzen!

The family of Martha Anne (Helber) Garbers created this Life Tributes page to make it easy to share your memories.