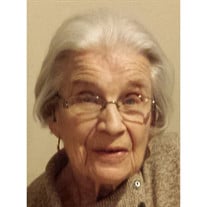 Mary Ann Culpert died Sunday March 19, 2017 at Sunset House surrounded by her family. She was 93. Mary Ann lived a full and blessed life. She was born in Toledo on August 14, 1923, the daughter of Bertha and Louis Nadolny. She graduated from Whitney High School and began working at LaSalle and Koch department store downtown. At LaSalle’s, she met Kenneth Culpert, and the two married in 1950. Together, they raised four children in their West Toledo home. Mary Ann taught her children the value of community service as she volunteered with the Boy Scouts, Girl Scouts, Ronald McDonald House, The American Cancer Society, Mobile Meals, Notre Dame Academy and St. Francis de Sales High School. She returned to the workforce in the 1970s, serving as Sunday manager of the LaSalle Westgate store. When her husband retired in 1981, Ken and Mary Ann moved to Largo, Florida. They stayed active serving as volunteers for Hospice of Pinellas County. She and Ken returned to Toledo in the mid-1990s, drawn back to Ohio to spend time with their children and grandchildren. A devout Catholic, Mary Ann served as a lector at Christ the King Church and both she and Ken continued their volunteer service with Hospice of Northwest Ohio upon returning to Toledo. Ken and Mary Ann were able to enjoy traveling in their later years and their lives were enriched by wonderful times with friends and family. In 2006, they moved to the Woodlands on Indian Road where they valued friendships with fellow residents and staff. After Ken’s death in 2007, Mary Ann remained a joy to her family and cherished her time with all of her children and grandchildren, especially at her son’s cottage at Merry Lake, Michigan. In an oral history with her granddaughter in 2015, she stated that she was proudest of what her children had made of themselves. "To me right now, family is the most important thing to have, for anybody," she said. "If you can have a family and a wonderful relationship with your family, then you've got everything." Surviving are her son, Charles “Chad” (Cheri) Culpert; daughters, Barbara (Jim) Yavorcik, Sister Mary Ann Culpert, SND and Ann (Fritz) Comes; grandchildren, April Szczepanski, C.J. Culpert, Jennifer Culpert (Scott) Hoernig, Carin Yavorcik (Adam Schenker) Michael Yavorcik, Lauren (Mark) Vanden Akker and Ellen Comes; 6 great-grandchildren and special niece, Georgeann Edford. She was preceded in death by her beloved husband, Kenneth Culpert; daughter, Mary Louise; sisters, Frances Nadolny, Eugenia Ehmann and Dorothy Celeste and sister-in-law, Louise Culpert. Friends are invited to visit from 4- 8 p.m., on Tuesday, at the Ansberg-West Funeral Home, 3000 Sylvania Avenue, (between Secor and Douglas Roads). A funeral mass will be celebrated on Wednesday at 10:30 a.m., at Gesu Church. In lieu of flowers, the family requests that tributes be made to Notre Dame Academy, The Autism Society of NW Ohio, Woodlane Residential Services or Hospice of NW Ohio. Online condolences may be sent to the family at www.ansberg-west.com

Mary Ann Culpert died Sunday March 19, 2017 at Sunset House surrounded by her family. She was 93. Mary Ann lived a full and blessed life. She was born in Toledo on August 14, 1923, the daughter of Bertha and Louis Nadolny. She graduated from... View Obituary & Service Information

The family of Mary Ann Culpert created this Life Tributes page to make it easy to share your memories.