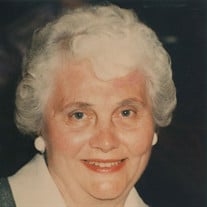 Mary Helen Wright "Sue", died peacefully, surrounded by her family at St. Anne's Hospital. The daughter of Helen Harrington Harpen and Howard John Harpen, she was a longtime parishioner at St. Agnes and Christ the King churches, and a 1945 graduate of Central Catholic High School. An avid lover of music and musical arts, she was a member of the glee club where she performed in operettas and where she met Joseph Wright whom she later married. Together they had seven children. She is survived by Kathleen (Kenneth) Kroos, James (Noreen), Ellen (Michael) McCarty, Marcia (Edward) Berger, Julie ( Archie) Hayford, and Thomas (Kathy). She was preceded in death by her husband, Joe, and son, John Howard Wright. An author of many articles on local lore, she also published a series of children's books describing her family's history. She loved music and enjoyed singing and playing piano for family and friends. Mary Helen and Joe were world travelers and deeply appreciated exploring other cultures. Later in life she became an Ursuline Associate. Her deep Catholic faith provided the guiding principles of her life. Her sense of humor, optimism and her desire to include others in her life made her the "rock star of Grandmothers." She remained actively engaged in all the activities and achievements of her children, nieces and nephews, thirteengrandchildren, seven great-grandchildren. She will be sadly missed. In lieu of flowers, please consider donations to the Wright Family Scholarship at Central Catholic High School or to the Ursuline Sisters of Toledo, Ohio. Friends are invited to visit from 2:00 p.m. to 8:00 p.m. Monday, March 12, 2018 at the Ansberg-West Funeral Home, 3000 Sylvania Avenue, where the Rosary will be recited at 3:00 p.m. and a wake service conducted at 7:00 p.m. Mass of the Resurrection will be celebrated 10:00 a.m. Tuesday, March 13, 2018 at Christ the King Church, where friends are invited to gather in the narthex after 9:00 a.m. Interment will follow in Resurrection Cemetery.

Mary Helen Wright "Sue", died peacefully, surrounded by her family at St. Anne's Hospital. The daughter of Helen Harrington Harpen and Howard John Harpen, she was a longtime parishioner at St. Agnes and Christ the King churches, and a 1945 graduate... View Obituary & Service Information

The family of Mary Helen "Sue" Wright created this Life Tributes page to make it easy to share your memories.