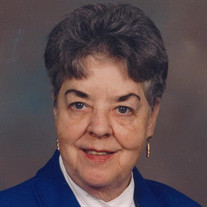 Mary Margaret (Heinl) Einhart, age 93, of Toledo, OH, died Wednesday, August 25, 2021, at Advanced Healthcare Center, Toledo, OH, under the care of Hospice of Northwest Ohio. Born on July 27, 1928, in Toledo, OH, she was the daughter of Bernard W. Sr. and Agnes (Fenn) Heinl. She graduated from Notre Dame Academy in 1946. She worked as a switchboard operator for the former Ohio Bell, leaving to start a family, Years later, she worked for Owens Illinois as a switchboard operator, transferring to the mailroom when the switchboard was automated, retiring in 1987. She worked at J.C. Penney Co. from 1994 to 2007. Mary Margaret was an avid autograph collector. The Toledo Lucas County Public Library listed her as an autograph reference for the area. In 1999, she donated her autograph collection on Watergate figures to the Ward M. Canaday Center at the University of Toledo. Another passion of Mary Margaret's was working on Family Genealogy, even having her records recorded in the Library of Congress. She sang in many church choirs and loved to perform for others, including performing at many TCCY (Toledo Council of Catholic Youth) ministries and musicals, both solo and group numbers. Mary Margaret assisted with different seminars at Notre Dame University in Indiana and helped form the National Divorced, Separated & Remarried Group in Boston in 1977. Additionally, she helped with the 1977 Local Divorce Conference at The University of Toledo, with Walter Cronkite's team in attendance. She served on the Notre Dame Academy Board and was a Historian of the Toledo Glass Club. In her spare time, she enjoyed puzzles, playing cards, reading and spending time with family and friends. Surviving are her daughters Mary (Mike) Thibault and Dorothy (Lou) Santo; step grandchildren Kayla (Mike) Maurer and Tiffany (Nick) Queen; four (very soon to be five) step great grandchildren; sisters Catherine Feck and Carol Szurminski; step-sister Helen Marie (Matthews) Michalek; special nephew Todd Hayes. She was preceded in death by her parents; brothers Bernard Jr., James, David; sisters Irene (Sr. Immaculee), Dorothy Rooney, Lucille Heinl-Lukasik, Ruth (Sr. Louisa), Bernadine Miller, Delores Mack and Louise Heinl; step-mother Helen (Hoffman) Heinl; step-brothers Harry, Richard, William and John Roberts and Anthony, Ronald and Thomas Matthews. Her family wishes to extend heartfelt gratitude to the staffs of Advanced Healthcare Center, especially her nurse Carol, and Hospice of Northwest Ohio. Visitation will be from 2-8 pm on Wednesday, September 1, 2021 at Ansberg-West Funeral Home, 3000 Sylvania Ave., Toledo, OH, with a prayer service at 7:30 pm. A Memorial Mass will be held at 10 am on Thursday, September 2, 2021 at Gesu Church, 2049 Parkside Blvd., Toledo, OH. Anyone wishing to make a Memorial contribution are asked to consider Toledo Sisters of Notre Dame or Gesu Catholic Church, both of Toledo, OH.

The family of Mary Margaret (Heinl) Einhart created this Life Tributes page to make it easy to share your memories.