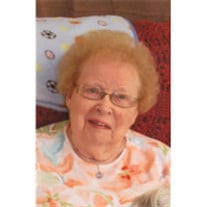 Mary Alice Modrall, 87, passed away on December 6, 2012, in Burlington, Wisconsin. She was born in Erie Pennsylvania on April 9, 1925. Mary Alice was a graduate of Moody Bible Institute. She moved from Chicago to Toledo in 1947. Prior to her retirement, she was employed by Mass Mutual as an office manager and Emmanuel Baptist Church as a secretary. She was very active at Emmanuel Baptist Church for many years where she was a Sunday School Teacher for the Bethel Class, drove the bus, and was involved in numerous aspects of the musical program. She was an avid sports fan, especially the Green Bay Packers. Mary Alice moved to Wisconsin five years ago to be closer to her family. She is survived by her loving children, Larry (Ann) Modrall of Ringgold, Georgia, Kathy (Paul) King of Burlington, Wisconsin; grandchildren, Kandi King of Washington D.C., Kari (Shawn) Maloney of Burlington, Wisconsin, Greg Modrall of Ringgold, Georgia, Brittany Modrall of Chattanooga, Tennessee; siblings, Earlyn (Thayne) Bodenmiller, Robert Hutchison Willetts, E. Victor (Sherry) Willetts and Grace (Ken) Kensinger. She was preceded by her parents, Rosa and Earl Willetts; siblings, Ann Willetts and "Jack" Willetts. Her family wishes to extend special thanks to caregivers Brenda Wienke and Rachel Ratkopvec. Mary Alice will be missed by her special friend Taylor Rose. Friends are invited to visit from 3:00-7:00 p.m. today, Sunday, December 9, 2012, in the Ansberg-West Funeral Home, 3000 Sylvania Ave. Visitation will also begin after 9:00 a.m. on Monday, Emmanuel Baptist Church where funeral services will begin at 10:00 a.m. In lieu of flowers, the family asks that donations be made to the Earl V. Willetts Scholarship Fund at Cedarville College, or the Emmanuel Christian Schools Scholarship Fund.

Mary Alice Modrall, 87, passed away on December 6, 2012, in Burlington, Wisconsin. She was born in Erie Pennsylvania on April 9, 1925. Mary Alice was a graduate of Moody Bible Institute. She moved from Chicago to Toledo in 1947. Prior to her... View Obituary & Service Information

The family of Mary Alice Modrall created this Life Tributes page to make it easy to share your memories.