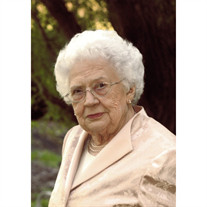 Mary Jeanette (Carroll) Schmidt, age 97, died Thursday, August 24, 2017, at Sunset House, Toledo, OH. Born June 26, 1920 in Swanton, OH, she was the daughter of Henry Thomas Carroll and Bessie Snider. Mary Jeanette was a graduate of Swanton High School and completed LPN training at Riverside School of Nursing in 1968. She was married to Walter R. Schmidt, September 28, 1946 until the time of his passing in 2000. Mary Jeanette was employed in various positions prior to her nurse’s training after which she worked at Riverside Hospital, retiring in 1985. For many years she was an active member of St. Louis Parish in East Toledo. She was an active participant in the Needle Arts Guild, Riverside Past Timers, and a volunteer for Helping Hands of St. Louis, and for Wildwood Park Manor House. Her grandchildren describe her as a strong and generous woman who was caring, and devoted – especially to her family. She will be remembered as talented, quick witted, warm hearted and resilient. “And man, did she love us.” She will be dearly missed. Mary Jeanette is survived by sons, Gregory (Darlene) Schmidt, and William (Linda) Schmidt; daughter Constance (David) Shriner; grandchildren, Michelle, Karl, Jennifer, Carol, Anne, Mark, Brian and Nicholas; and 12 great grandchildren. She was preceded in death by her parents, husband, and three brothers, Charles, James Raymond and Nicholas Carroll. Family and friends are invited to visit on Monday, from 2-8 p.m., at the Ansberg-West Funeral Home, 3000 Sylvania Avenue, (between Secor and Douglas Roads). Prayers will begin on Tuesday, at 9:30 a.m., from the funeral home, followed by the funeral mass at 10 a.m., at Christ the King Catholic Church, 4100 Harvest Lane. Interment will follow at Ottawa Hills Memorial Park. Memorial contributions may be made to Helping Hands of St. Louis, 443 Sixth Street, Toledo, OH, 43605 or Ashanti Hospice, 4020 Indian Road, Toledo, OH, 43606.

The family of Mary Jeanette Schmidt created this Life Tributes page to make it easy to share your memories.