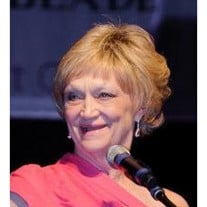 Wife, mother, sister, friend, public servant. Mary Christina Skeldon was these things and more to those lucky enough to have known her. Mary died May 23, 2015, surrounded by her family, after she ended her 18 year battle with breast cancer on her terms; appreciating every last minute of what life had to offer. Mary was born to Ralph and Sophie Zychowicz on December 13, 1952. Ralph and Sophie were first generation immigrants from Poland. Mary learned the value of hard work and sacrifice early in life as her father built his own business, working long hours and having tremendous pride in his work. Mary attended St. Catherine of Siena Catholic Elementary School, and Notre Dame Academy for high school. (She was inducted into the Notre Dame Academy Hall of Fame in 2006.) Following her graduation from Notre Dame, Mary enrolled at The University of Toledo, where she received her Bachelors Degree in Communications. While there she was a proud member of Chi Omega Sorority. Mary's life changed forever when she met a guy from the Old West End with a big smile and a bigger heart; Marty Skeldon. They met at Devil's Lake. Marty left for the Army shortly thereafter, but when he came back, they started dating and fell in love. Marty and MC (as she was called by friends), were a one of a kind couple. They were best friends, and together they befriended many. They started a family, having three children, Mark, Maureen, and John. Mary was a proud woman, and her pride was no more evident than when talking about her children. She valued time with Marty and her kids above all else. Mary began working for the City of Toledo when she was 16 years old, working at the puppet theatre at Ottawa Park, where she was able to use her considerable artistic talents. For the next 40 years Mary worked for the City of Toledo in many different capacities. Among her notable achievements, she helped start the City's recycling program and was the first Recycling Coordinator. She was the Public Information Officer for Mayors Carty Finkbiener, and Jack Ford. In her job as Public Information Officer, Mary found her professional calling. Congress Woman Marcy Kaptur recalls, "As wife, mother, friend, and dedicated public servant, Mary Chris Zychowicz Skeldon lived to give life to others. Her strong family and her professional pursuits have built our City into a more gracious and enduring community. Mary Chris embodies the words 'a mother for us all.‎'" Mary cherished the friends she made in her years working for the city. She was especially proud of the young professional women that she mentored over the years, many of whom are currently leaders in the business and non-profit community. Mary's battle with cancer stared in 1997. She quickly realized that the cancer was more serious than had originally been diagnosed. She had stage 4 breast cancer. In 1997 this was often times a death sentence, and she was in fact told that she had 1 year to live. Mary refused this prognosis and instead travelled to The Cleveland Clinic where she received experimental stem cell treatment. The treatment was successful, and Mary was pronounced cancer free at the end of 1997. She remained cancer free for the next 13 years. Mary's first battle with cancer had an unexpected consequence. Facing death gave Mary a newfound appreciation for even the smallest aspects of life. She lived in the present, and was thankful for each day that she had. She got involved in The Susan G. Koman Foundation, including serving as Chairman of the Board. Mary's cancer returned in 2011. She battled valiantly, this time treating with experimental drugs at the Karmanos Cancer Center in Detroit. Though the cancer was even more widespread this time, Mary was defiant and resolute that she had more life to live. This allowed her to see the birth of another grandchild, watch her granddaughters grow, and witness the marriage of her youngest child. In her final days, she was determined to make it to her daughter's wedding. On Friday, May 22, Maureen and Ben were married at her bedside in Hospice of Northwest Ohio. Mary's appreciation for life and fighting spirit is cherished by her family. Mary is preceded in death by her parents Ralph and Sophie Zychowicz. She leaves to mourn her loss, her loving husband of 42 years Martin Skeldon, her three children, Mark Skeldon, Maureen Hildebrand and John Skeldon, daughters-in-law Jennifer Skeldon, and Elizabeth Skeldon, and son-in-law, Ben Hildebrand. She leaves behind her adoring grandchildren Meghan, Kate, and Zachary. Also left to her memory are her brothers Ralph Zychowicz (Jane), and Michael Zychowicz (Janice) and Sister, Carol Dupuis (Tony). Marty and the family would like to extend special thanks to Dr. Patricia LaRusso and the staff at the Barbara Ann Karmanos Cancer Institute, Dr. Kenneth Krupp and the staff at the Hickman Cancer Center, and all of the other caregivers throughout the years who helped us along this journey. The family requests that in lieu of flowers, that friends and family instead make donations to The Susan G Koman Foundation, in the name of Mary Chris Skeldon. The family will accept visitors at Ansberg - West Funeral Home located at 3000 W. Sylvania Avenue on Wednesday May 27, 2015 from 12:00pm noon until 8:00pm. A memorial mass will be celebrated at GESU Church on Thursday, May 28 at 1:00pm. Condolences for Mary's family may be left online at www.ansberg-west.com.

Wife, mother, sister, friend, public servant. Mary Christina Skeldon was these things and more to those lucky enough to have known her. Mary died May 23, 2015, surrounded by her family, after she ended her 18 year battle with breast cancer on... View Obituary & Service Information

The family of Mary Chris Skeldon created this Life Tributes page to make it easy to share your memories.