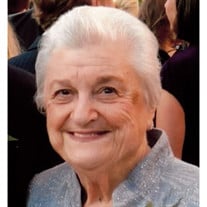 Spencer Mary F. Mary F. Spencer, 83, died on March 19, 2015 surrounded by family members at the University of Toledo Medical Center in Toledo, Ohio. Mary was born September 22, 1931 in Wilmington, North Carolina to James & Elizabeth Finberg. Mary was a graduate of New Hanover High School, Wilmington, NC, attended Wake Forest College, Wake Forest, NC, where she met Lawrence L. Spencer, they were married in Wilmington, NC on August 22, 1953 , she went on to graduate from the University of Toledo in 1987. Mary was a secretary at the University of Toledo department of Health Promotion and Human Performance for 23 years retiring in 1992. Mary had many affiliations; she was a member of the First Baptist Church of Greater Toledo for 48 years, she was interim Director of Christian Education from 1967-1968, Founder and Teacher-Pathfinders Class for 40 years, member of the Chancel Choir, Member of the Handbell Choir, Past Chairman of the Board of Christian Education, Past Chair of the Board of Deaconesses, Church Clerk from 1989-2009, Editor of the Open Door-International Magazine for Y-Wives of YMCA Directors from 1972-1974, and Past Member of the Board of Directors-Toledo Campus Ministry. Mary was preceded in death by her parents and sister, June Reece. She is survived by her loving husband of 62 years, Larry and her children, Larry Jr. (Becky) of Jackson, MI, Jay (Monica) of Springfield, OH, Todd (Katy) of Phoenix, AZ and David (Beth) of Toledo, OH; grandchildren, Sean, Shannon (Marc) Opsincs, Courtney (Brian) Wayne, Molly (Alex) Meddock, Alex, (Alexa) Spencer, Stephanie (Julian) Nino, Allison, Emily, Madison, T.J.; Great-Grandchildren, Gibson and George Wayne, Spencer and Savannah Opsincs; Sister, Barbara (Orvis) Bordeaux of Delco, NC and Sister-in-law, Francis Williams of Florida. Friends are invited to visit on Sunday March 22, 2015 from 3:00-6:00pm in the Ansberg-West Funeral Home, 3000 W. Sylvania Ave. Services will begin at 11:00am on Monday at First Baptist Church, 6520 Pilliod Road, Holland, Ohio 43528. Contributions can be made to First Baptist Church of Greater Toledo. Online condolences may be left for Mary’s family at www.ansberg-west.com

The family of Mary F. Spencer created this Life Tributes page to make it easy to share your memories.