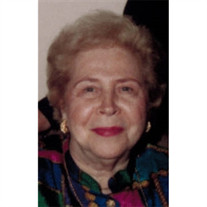 Mathilda “Mat” Tanner passed away on February 12, 2016, after a very full and happy life. She was born on January 26, 1926, and was raised in Grosse Pointe, MI where she began a lifelong love of music. Her primary instrument was the violin although she was also an accomplished pianist. During high school she was invited to play in the Detroit all city orchestra as a violinist. At age 17 she entered Denison University and graduated with a double major in education and music. While at Denison Mat met her future husband, Daniel Tanner and they were married in Columbus in 1947 where Dan was in Medical School at Ohio State University. Mat taught elementary school in Columbus for 4 years until she and Dan moved to Detroit where Dan was in a residency program at Henry Ford Hospital. During their time in Detroit, Mat taught school for several years in the Grosse Pointe, MI school district and in 1955 they moved to Toledo, OH to be close to both Mat's family in Detroit and Dan's in Columbus. Mat was a devoted wife, mother and grandmother, and in Toledo became a very active volunteer with a number of organizations. She was one of two women on the building committee for Christ Presbyterian Church, was a docent at the Toledo Museum of Art and was on the Board of the American Cancer Society . For two years she was Lucas County chairman for the Cancer Society 's Annual fund drive. For 30 years she was also a volunteer at Wildwood Metro Park and Chaired the Furnishings and Fine Arts Committee for the Wildwood Manor House. Gardening, flower arranging, bird watching and studying the decorative arts were a few of Mat's favorite hobbies. Mat was especially proud of her two children, daughter Mary Ellen Tanner of Toledo who spent so much time caring for both her parents in their last years, and son, Dr. Michael Tanner (Marie) of Columbus, OH. Mat also had many hours of pleasure with her two grandchildren, grandson, Stephen (Kelly) Tanner and granddaughter, Christie (Scott) Smith. All of the above survive. Additional survivors include niece, Jane Ann (Paul) Nehra of Grosse Pointe, Ml and their daughters, Annie, Mary Elizabeth and Kate Nehra. Mat was preceded in death by her husband, Daniel; sister, Irene Lowther, and her parents. Burial will be private with a memorial service scheduled for March 5, 2016, at 1 p.m. at Christ Presbyterian Church 4225 W. Sylvania Ave., Toledo, OH. There will be no visitation. Mat's family is extraordinarily grateful to special caregivers who became dear friends, Cindy Spohn, and Sue Kistner. The family suggests memorial contributions be made to Christ Presbyterian Church, the American Cancer Society , Hospice of Northwest Ohio or the Colonial Williamsburg Foundation. Arrangements entrusted to Ansberg-West Funeral Directors - See more at: http://www.legacy.com/obituaries/toledoblade/obituary.aspx?n=mathilda-tanner&pid=177789874&fhid=27574#sthash.WKzYEN2R.dpuf

Mathilda &#8220;Mat&#8221; Tanner passed away on February 12, 2016, after a very full and happy life. She was born on January 26, 1926, and was raised in Grosse Pointe, MI where she began a lifelong love of music. Her primary instrument was... View Obituary & Service Information

The family of Mathilda Tanner created this Life Tributes page to make it easy to share your memories.